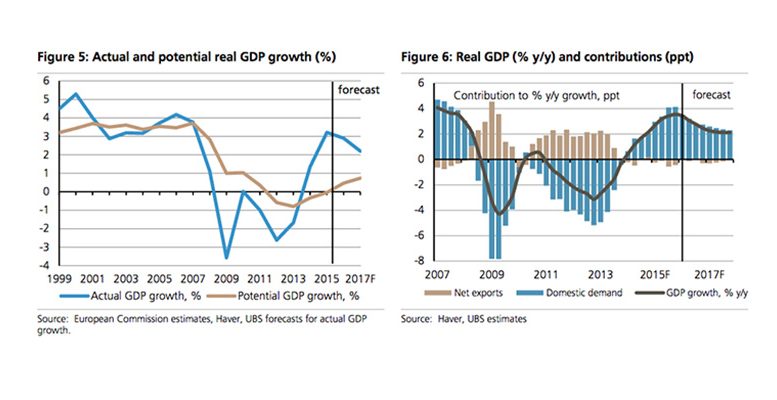 UBS | In this report, we focus on three pivotal questions that we consider crucial for investing in any security in Spain: First, what is the economic outlook for 2016/17, and what are the biggest economic policy challenges that the next government will face? Second, what are the likely scenarios for the outcome of the elections on 26 June? And third, what is the valuation and relative attractiveness of Spanish assets, how will asset markets react to different election outcomes, and what is or is not priced in?

We forecast Spanish GDP growth to decelerate from 3.2% in 2015 to 2.9% this year and 2.2% in 2017, with domestic demand remaining the main growth driver. The expected deceleration should not be interpreted as a negative view on the Spanish economy, but as an almost inevitable moderation after very strong growth in 2014 – 2016. Despite Spain’s remarkable economic recovery, we believe the next governmen t will have to devote ongoing attention to: (1) labour market reform; (2) public finance consolidation; and (3) growth-enhancing structural reforms.

We focus on four potential election outcomes: (1) a le ft-wing coalition of PSOE and the far left Podemos -IU; (2) a grand coalition of the centre-right Partido Popular (PP) and PSOE, possibly including the centrist Ciudadanos; (3) a centre-right coalition involving PP and Ciudadanos; and (4) a hung parliament followed by repeat elections in early 2017. The latest polls seem to suggest an outcome not so different from the December 2015 elections, which would once again make it difficult to establish a stable government. See our interactive model which illustrates the potential impact on asset classes and key stocks in Spain where investors can adjust election result probabilities.

Equities: 9% relative discount to Europe due to EM, banks, politics

Spanish relative EPS momentum finally turned positive after some two years of downgrades. Despite solid domestic economic growth, the IBEX has underperformed Europe by c15% since January 2015, due to the index high emerging markets (EM) exposure, heavy banks weight and political risks. Some of these drags should ease. However, political scenario 1 (a left-wing coalition) is not fully priced in on our view and could slow down the earnings recovery by impacting banks’ profitability, which account for broadly half of th e expected earnings growth. Scenarios 2 (a grand coalition) and 3 (a centre-right coalition) would keep the earnings recovery story intact and thus likely trigger relief rallies, whereas scenario 4 (a hung parliament) would likely prolong the current environment of uncertainty. We see Value as attractive, especially domestic banks and infrastructure. Our top picks are Bankia and Sabadell, Abertis and Aena, Telefonica, IAG and Mediaset Espana. Buy rated stocks in Spain that we believe are relatively insulated in any election results include Ebro Foods and Grifols.

In the absence of political risks materialising, we are positive on the outlook for Spanish sovereign yield spreads. If political risks – in Spain and elsewhere – do not materialise, we think nominal GDP growth running close to 4% y/y by end-2017 should help the prospects for debt sustainability, such that spreads should tighten to around 90bps over Germany by the end of 2017. However, expected rises in core bond yields should mean that Spanish yields also rise in absolute terms.