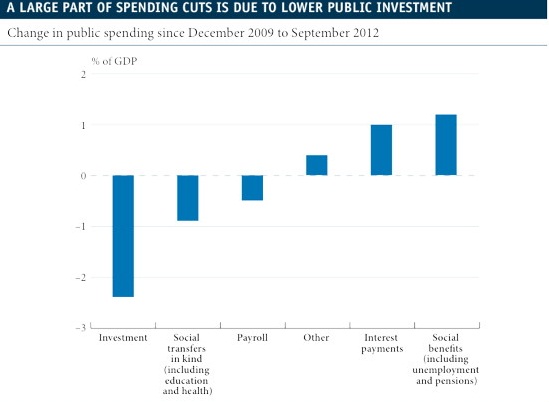 Market perception regarding the solidity of Spain’s public accounts has improved slightly. The government’s commitment to fiscal consolidation and the progress made towards greater banking and fiscal union in Europe have lowered tensions in the country’s sovereign debt, an affect that has been reflected in the warm welcome given to the latest debt issued by the Public Treasury. However, both the target for adjusting the fiscal deficit and the one for public borrowing in 2013 are still very demanding. It is therefore vital to avoid complacency in order to meet these targets.

In fact, financial tensions in the sovereign debt markets of the periphery eased significantly during the first three weeks of the year. In Spain’s case the risk premium, calculated as the spread between yield required for 10-year Spanish and German bonds, had fallen to 343 basis points at the time of writing this report. This figure represents a correction of 295 basis points compared with the peak reached in July 2012, an improvement that, in differing measures, also spread to the rest of public debt securities.

The Public Treasury took advantage of this greater investor appetite for Spanish debt, increasing the amount it issued. Specifically, during the first three weeks of the year it managed to place around 27.5 billion euros in short and long-term debt. As a consequence, close to 12% of its gross financing needs for the whole of 2013 were covered in this period, a figure the Treasury estimates at between 215 and 230 billion euros. The final figure will depend on the extent that the autonomous communities make use of the Autonomous Liquidity Fund (FLA in Spanish), which has been allocated 23 billion euros compared with 16.6 billion euros last year. In addition to higher debt issuances, renewed interest in debt securities has also helped to consolidate the reduction in the average cost of public debt.

The respite granted by the markets over the last few months is partly due to changes in discourse concerning compliance by the public sector of the required fiscal adjustment. According to the European Commission (EC), the efforts made by the government in 2012 were in line with the requirements of Spain’s Stability Plan. As a consequence, the deviation from the target deficit for 2012, which the EC places at 0.7 percentage points, can be put down to a greater than expected decline in the economy.

Nevertheless, the fiscal consolidation process is still far from over. According to the 2013-2014 Budget, the deficit should fall by 1.8 percentage points of GDP this year. Therefore, if we assume the same adjustment as from the deficit level estimated by the EC in 2012, namely 7.0% of GDP before including losses recognized as aid for banks, the new deficit target for 2013 would be 5.2% of GDP. However, if we maintain the adjustment in the structural deficit required by the Budget of 1.4 percentage points, and we assume that the cyclical balance remains constant, then the deficit target for 2013 would rise to 5.6%. In this respect, the macroeconomic scenario presented by the Commission at the end of February will be crucial. The growth forecast for the Spanish economy, as well as the potential GDP forecast for 2013, will determine the new deficit target set by Spain’s stability programme.

Even this new deficit target will be difficult to achieve. The fall in GDP in 2013, which we expect to be 1.3%, will continue to hinder improvements in tax revenue and social expenditure items, such as unemployment benefit. Moreover, containment in the average cost of financing will not prevent further pressure on interest payments due to the growing volume of public debt stock. As a consequence, new fiscal consolidation measures may be required during 2013. In this respect, the room for manoeuvre in some of the items of expenditure is very limited. This is the case of public investment which, as shown by the graph above, was the main channel for adjusting spending between December 2009 and September 2012, going from 4.5% to 2.1% of GDP. Given this situation, the government is preparing to restructure the public sector to help boost the correction in the structural deficit. The bulk of the evidence available suggests that this will mainly be based on eliminating overlaps, as well as improving the efficiency of public administrations.