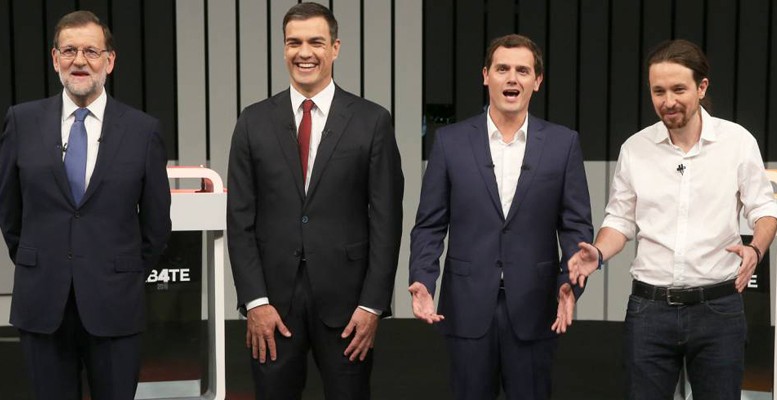 Ten million Spaniards watched the most important debate between candidates from the four parties which could form a Government in Spain on Monday night. And yet the participants did not clarify the most important point: Will there be a Government after the elections on June 26? Only the left-wing populist coalition Unidos Podemos reiterated its will to sign a pact with the Socialist party. A poisoned offer which would give the PSOE either the “useful idiot” role or a irrelevant position with serious risk of implosion.

Since it emerged in Spanish politics, 1,000 days ago now, Podemos strategy has been of a left-catalyst, signing pacts with the nationalists/regionalists groups, absorbing both Izquierda Unida and the Communist Party, and finally eating the PSOE’s cake, despite the leftist old party’s great experience of government and its crucial role in the Spanish democracy.

Mr Pablo Iglesias, leader of Podemos, is asking the PSOE exactly the same thing that he refused to give them just two months ago. Mr Sánchez, a young, ambiguous head of the PSOE, avoided his oponent without going into details. Both Podemos and the current Spanish PM Mariano Rajoy know that they can only govern with the support of the Socialists, there is no other alternative. This puts them in a difficult position: they need to make a choice, but not before counting the votes.

It did not come as a surprise that the debate did not offer fundamental answers. Each party will be measured by the voters. The rest of the long debate, more than two hours, and subsequent analyses in all TV channels, was rhetoric and only helped to showcase (or not) each participant. Very few crucial proposals, no fascinating political analysis. We saw data manipulation as well as biased quotes which smelled of propaganda.

More than 10 million viewers followed the exciting Euro Cup match, and more than 10 million watched the debate. The second broadcast came with lots of fuss but very shallow arguments. We still have no clue of what will happen after June 26.