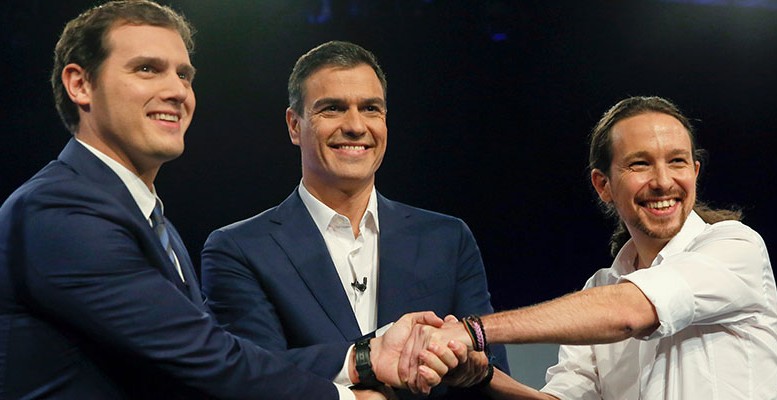 The political parties in Spain seemed unwilling to break the deadlock one month after the general elections had taken place. Then there was a dramatic emergence from the doldrums last Friday, when Podemos made a surprise call for a left-wing coalition headed by the Socialists.

Furthermore, the incumbent Prime Minister declined the King’s invitation to seek a confidence vote in Parliament, cornering the Socialist leader in a most uncomfortable position: either caving in to Podemos’ stern conditions or throwing in the towel and supporting a coalition government. With this audacious move, PM Rajoy is betting his chief opponent will think twice before risking a new election and the likely prospect of losing it.

But Mr Sánchez holds a winning card he might play in full. After all, the only way of ensuring a widely-backed government would rest on a left-wing coalition once the Socialist Party had flatly rejected supporting Mr Rajoy. Such a cabinet could claim a majority in Parliament, but it seems doubtful it would command enough stability. The Socialists and Podemos share a common goal in wishing to dismantle most policies implemented by Mr Rajoy’s former cabinet. But they scarcely agree on the way to run the country, in particular when it comes to economic policy, or dealing with the separatist drive in Catalonia. In addition, the alarming relations Podemos has nurtured with Venezuela and, supposedly, Iran does little to inspire confidence in such a partner.

Podemos believes that only a referendum on self-rule could defuse a fully-fledged Catalonian secession, a step the Socialists fear could split the country and dissipate their support elsewhere in Spain. Even if they agree to shelve this sensitive issue, Mr Sánchez faces an awesome task in convincing the markets his cabinet might hold the line in steering the economy. His potential allies openly advocate expense-driven policies, paying little regard to fiscal discipline. They even call debt servicing into question should it reduce the room for manoeuvre in fully implementing an ideal welfare state. Both parties share some priorities such as fighting corruption or ensuring a social agenda and enhanced public services, but they openly disagree on how to meet these targets. Podemos is prone to disregard any market-linked requirement,while the Socialists are all too aware that any reckless attitude would inevitably backfire, plunging the economy into deep disaster.

Against this backdrop, setting out a sensible government programme seems out of reach unless Podemos throws most of its core principles out with the rubbish. Why should they sacrifice themselves when they count on new elections for broadening popular support? So Mr. Sánchez will soon discover his drive for Premiership seems hopeless. He would be well-advised to refrain from such a risky gamble as all the blame for the foreseeable collapse in talks would fall on him.

Let’s face it. The grand coalition tabled by Mr Rajoy fails to ensure common ground for a shared policy. Even an independent PM supported by the main political parties would find himself locked in a permanent stalemate. Only a centre-right cabinet implementing a widely-supported reform platform, closely scrutinised by the Socialist Party, might do the trick. But as the main opposition party’s response to this is  flat refusal, only another election can create a new scenario and ensure a better chance for a stable government.