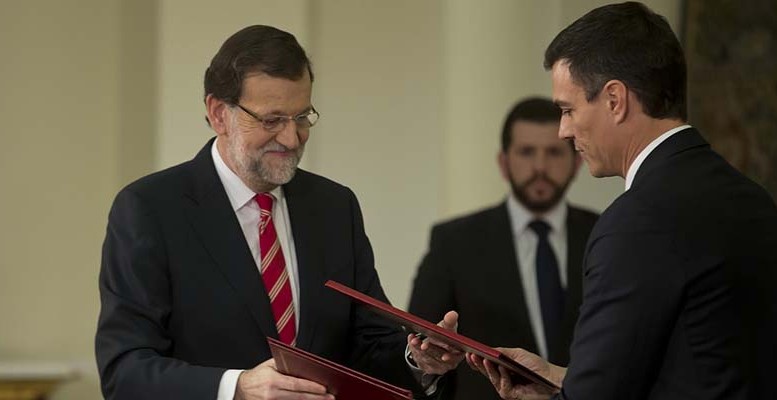 The Spanish Parliament’s Chairman, Mr. López, has bitterly announced that failure to guarantee a coalition government will involve new elections in late June, warning of citizens deep frustration with parties’ inability to reach an agreement. Even if most political leaders share his dismay, they have shown little interest in breaking the deeply entrenched deadlock. The Socialists, enjoying a key pivotal role after snatching support from centrist Ciudadanos, refused to contemplate a grand coalition with the right-wing Partido Popular. They also rejected calls from the Podemos extremist movement to establish a volatile government founded on a bunch of separatist formations.

These were the only potential options up for grabs following the last elections results. Both required the Socialist party’s backing, thus putting pressure on its leader Mr. Sánchez. He wisely went on the offensive and so prevented being cornered. With the scant support of Ciudadanos, he made a doomed attempt to secure premiership. He might have failed, but his move curbed any internal challenge. Moreover, he can boast of being the only one to put forward a formal candidacy.

The incumbent President, Mr. Rajoy, preferred to wait and see,  taking a punt on his chances improving if new polls took place. Badly hit by a series of corruption scandals involving his party, the only chance of coming to terms with his opponents lay in stepping down from the premiership. A huge sacrifice he was not ready to make. He bets that voters’ widespread anger will lead to a much reduced turnout, thus boosting his undisputed candidacy.

Ciudadanos took the risk of becoming Mr Sanchez’s “compagnon de voyage,” ignoring its campaign pledge to refrain from backing any other party should it fail to win a clear majority. It will come under fierce attack from the Partido Popular, eager to recover former voters who switched to the centrist party. All the more so since Ciudadanos unwisely agreed to a last ditch attempt at formal discussions with the Socialists and Podemos for a hopeless solution. Yet polls point to a sharp increase in its seats and to a dwindling influence of left-wing parties in the new parliament. So the door would remain open to a centre-right coalition after the next elections.

All in all, resorting to fresh elections seems a better prospect than forming a government which is hostage to extremist policies. Voters might feel frustrated, but they would have faced a bleaker outlook if a left-wing cabinet had happened to materialize.