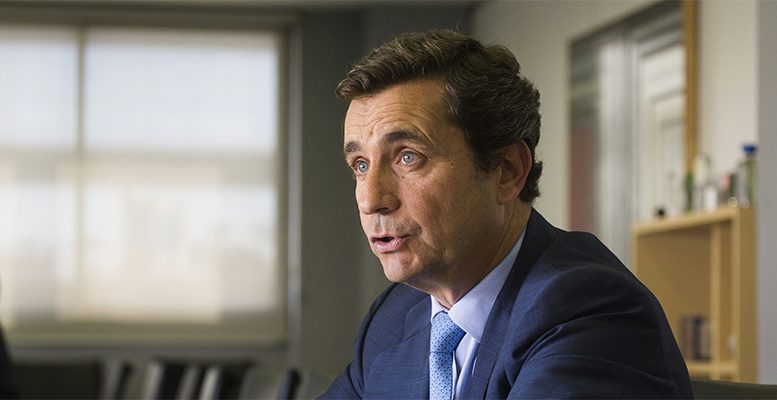 Eduardo Fernández-Cuesta worked for 25 years in CBRE, one of the biggest property consultancy companies in the world. He has been an independent member of AENA’s board since 2014 and since 2013 has chaired The Royal Institution of Chartered Surveyors (RICS).

Q: Developers are complaining that the banks are now not at all keen to give loans for housing projects. Is that right?

A: No. The banks are very professional now. They are financing residential developments, in which they are very interested. What they don’t do now is finance all of it. They want the developer to take the risk, buy the land and turn up at the bank with pre-sales in hand. I think they are doing their job: they now only lend if they think the project is worth it and they will get their money back.

Q: Do you think the recovery seen in the tertiary property sector (particularly in offices) in Spain is in line with the rest of Europe?

A: The market is performing in a similar fashion in the main European capitals, but perhaps its more intense in Spain, in other words in Madrid and Barcelona. Investors are very selective but they have focused on assets in both these cities.

A: The huge decline in property prices in the Spanish market after the crisis created the possibility of obtaining signifcant capital gains. Furthermore, the Spanish economy has grown at a good pace and some important reforms have been carried out. For example, in the financial sector or the labour market or for socimis. All this meant that confidence in the Spanish economy began to improve in 2013 and money began to flood in.

Q: Prices have gone up a lot in the last three years. Are there still opportunities in office buildings?

A: Yes there are, but you need to be very selective now. Investors have been very active buying for some years, and so now there are not so many clear opportunities. For that reason, we will see more corporate deals in the next year. Now it’s important to add value to property, basically through refurbishment, new construction and a better positioning of the buildings in the market.

Q: But the office rentals in Madrid’s prime area are still below those which were normal before the crisis.

A:  That’s right, they are lower. It’s expected that in 2017 they will continue to grow at a good pace in Madrid and Barcelona, but only in the case of specific buildings, not in general. In other big cities, nothing much is moving. Rentals are between 8 and 12 euros historically and they are not moving from that level.

Q: So you don’t foresee a boom in valuations in the coming years?

A:  Yes, yields have dropped a lot recently: the prime yield would have been 5.5% two years ago and is now 3.5%. So undoubtedly valuations should rise.

Q: Why have they fallen so much?

A: There is a lot of money in the market and there have been many transactions, which has meant asset prices have soared. Investors want to invest. You have to bear in mind that there is a lack of alternatives to property investment, which gives such good and guaranteed returns. These investments in prime offices, which are top level in terms of quality and location, are very interesting. Particularly if we think that rentals will indeed rise in the long term. If the investor has a conservative, long-term profile, not speculative, then investing in these assets has been and will continue to be a good business.

A: All the classified, finalist land in Madrid and Barcelona is being sold in a extraordinary manner. And prices are rising in a spectacular way, which is rather worrying I would say. There is a lot of land which is not classified or urbanised, in the hands of financial institutions, which could be used but, as things are, there is no way out for that. What should be done? Take advantage of the fact there is a lot of money in the market, which would be very happy to be invested in this land. And that would happen, I repeat, if investors were given certainty in terms of deadlines and the cost of developing these projects.

Q:And why is that not happening? It seems simple enough.

A: The solution is for both the financial entities, which own this still undeveloped land, as well as, basically, the administrations, to agree to develop this land. Turning it into finalist land is the only way to bring down housing prices. If city councils really want to do some kind of social work, which is what they should do, they need to promote this.

Q: Do the banks no longer have any classified land?

A: Not in the big urban areas. Practically all they have is unclassified land, which needs to be developed.

Q:Are these difficulties for creating land just found in Spain, or in the whole of Europe?

A: There is a lack of a city project in Spain. There was one in Barcelona which was shared between all the administrations and began with the Olympics. And everyone sought the best for this city and its inhabitants. Then later, to be honest, all the city councils, no matter their leaning, have been very politicised. And it didn’t have to be like that. I believe that people from Madrid or Barcelona would easily agree on a series of basic things: cleaning, security, mobility, access to housing, fighting against unemployment, culture. And perhaps, fairly or unfairly, the impression is that these basic services are deteriorating and there is no recognisable policy for fighting unemployment.