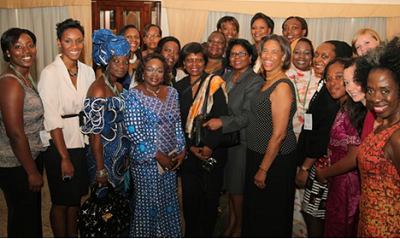 make your ex gf come back NEW YORK | She has traveled from South Africa to New York, almost 8,000 miles (13,000 kilometers), to do some useful networking. Melanie Medell, who runs her own textile company in Cape Town, is one of the 47 African women from 37 countries participating in the third annual Africa Women Entrepreneurship Program (AWEP). During three weeks, they will engage in conferences and professional training in different cities. As they explain to The Corner, for most of them this is the first time they get to speak to American corporate people, but also, and more important to them, to reach their African counterparts.

“Africa is really our market. My company manufactures bed linen, bathrobes, curtains… and it's in Africa where most of the hotels are being built right now. Africa is the new exciting economy. It's vibrant, with color, people and diversity,” says Melanie Medell.

For Francesca Brenda Opoko, an experienced businesswoman who sells value added cosmetics made of shea butter both for her local market in Ghana and abroad, the main problem for African entrepreneurs is how to get information and know-how.

“I am not an NGO thing, I work on a commercial base,” she emphasizes. “I am hoping to learn a lot from people who are here and figure out why some business can get so big in the U.S. There must be the amount of opportunities but also I guess there is a ruling principle. They have more real information to profile the right people, how to reach their customers properly. It's more about technology access, being able to understand global trends and to adjust.”

Fashion designer Theodora Adjoa also comes from Ghana, a country that debuted as an oil producer in 2010 fueling the fastest economic expansion on the continent although this has also badly spurred inflation. Adjoa has already made a name is Ghana with her clothing factory and a big shop. She wants to get business ideas and improve her management techniques.

“I have been in business for 15 years but I want to extend my clients. I want to grow. First of all in my own country, it's a step by step thing. I believe in growing steadily in order to be able to meet demand,” she explains.

For many of them the most difficult thing is to obtain the money to start and eventually to leverage. Namibia's Albertina Amupolo started to plaid hair in a beauty salon until she could start her fashion brand.

“In my country you need to have a house or a car so you can have access to a loan. I am a small entrepreneur, therefore it's very complicated for me to generate money. I am here because I want to learn everything. I don't know what the future holds, so I have to pick up as much as I can here, and bring ideas and contacts to my fellows in Namibia. Women entrepreneurs are looking forward for me to come back and tell them everything.”

Despite their unalike environments and backgrounds, all of them face a common challenge back home: China. Beijing's investment has risen from US$681m in 2000 to US$9.3bn in 2010. Critics insist that the Chinese are taking the continent as a massive food basket, not creating as many opportunities, jobs or growth among locals as promised.

“The Chinese are all over the place! Especially in the textile and the everyday use products they are partnering with people and dumping cheap, very poor quality products,” complains Francesca Brenda Opoko. “And even when their quality is OK, their price is so low that they kill other people's iniciatives. I do natural cosmetics. And I see Chinese companies who put 1% of natural ingredients but they label their products as natural.”

She has decided to champion a cause for buying made in Ghana goods.

“People still patronize Ghanian products,” explains Theodora Adjoa pointing to her crispy black and white linen outfit. “This dress I am wearing you can get it made by Chinese workers. But it would be a replica. We custom made our designs”.

For Melanie Medell, the situation will not be sustainable for Beijing in the long term.

“In South Africa a lot of people are importing finished products from China at a much lower price than we can manufacture. And obviously they are not that concerned about the quality and sustainability, they want bigger profits. But the whole world has turned to China and with their number of consumers growing, they will not always be able to meet a steady supply. So I believe that eventually people will start factories again. The problem is that it's very expensive to start a factory,”  she points out.

Women participating in this program have been carefully picked as the voices of thousands of other entrepreneurs. The U.S State Department is aware of Africa's potential. Although today most U.S. direct foreign investment is still going to Latin America and Asia, some iniciatives like the AWEP aim to increase trade and build alliances.

The continent's middle class is already spending as much as US$680 billion annually: 355 million people in 2010, it is projected to grow to 1.1 billion by 2060. This year alone, Africa's economy is expected to grow at almost 6%.

And yet Africa means some risk. Battered by wars, corruption, weak institutions and stereotypes, it needs to reinvent itself.

“The continent is doing well statistically with its robust growth rate (africa_eiu), but not necessarily for most of its citizens, with youth unemployment hovering at 60% in the largest economy, and with smaller countries faring even worse,” writes founder of the non-profit African Institution of Technology Ndubuisi Ekekwe in the Harvard Business Review magazine.

In spite of all, an increasing number of investors are willing to give it a try. According to a recent report by the Economist Intelligence Unit, FDI is picking up.

“Interest is rebounding and several major deals have been concluded or are in the pipeline. Telecommunications and banking remain the biggest non-commodity draws for foreign investors, and this trend is likely to continue. But retailing is on the rise, spurred by urbanization and the rise of the modern African consumer,” the report states.