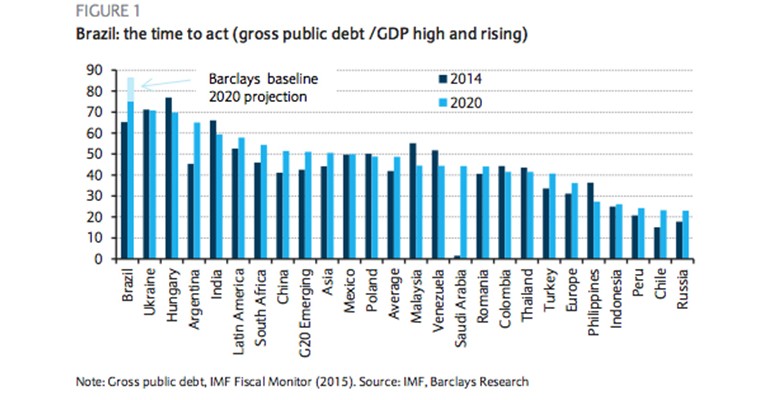 BARCLAYS | Brazil is confronting a toxic combination of a primary budget deficit, high public debt (relative to EM countries), very high real interest rates (the Selic stands at 14.25%), sluggish trend growth, a negative commodity price shock and potential contingent liabilities for the sovereign, which together spell trouble for public debt dynamics. The recent downward pressure on the fiscal balance is partly associated with the slide in commodity prices and sharp downturn in the economy. However, the deterioration of the fiscal position is also structural and the politics do not seem capable of turn ing these adverse dynamics around in the foreseeable future.

The combination of high debt/GDP and high interest rates means that B razil suffers from ‘fiscal dominance’, a situation where monetary policy is driven by sovereign solvency concerns. Given the sensitivity of public debt to high interest rates in Brazil, the central bank is unlikely to tighten policy despite high inflation. This raises question marks about central bank credibility and could ultimately be negative for asset prices. Brazil could grow out of its public debt problem, but the country’s recent history offers few grounds for optimism.

Brazil entered the commodity price shock in a weak economic position. Its rate of investment had seen limited uplift from the commodity price boom, and during 2010 – 2015 , the rate of national saving s fell substantially . The result was a gradually rising current account deficit. Low rates of investment and lacklustre productivity growth combined to create a low rate of growth in productive capacity .

How much time does Brazil have before markets push sovereign yields higher , accelerating the unsustainable debt dynamics? There are some important risk mitigants. Brazil’s debt is predominantly payable in local currency, and what is payable in foreign currency is covered many times over by its international reserves . The problem is that , by our estimates, public debt in Q4 2015 will be more than 71 % of GDP with average funding costs at more than 12% , with no prospects for a turn – around towards a sustainable primary surplus or stronger growth prospects.

Addressing the structural problems to support fiscal consolidation and enhanced long – term growth will be difficult, but in our view is unavoidable. Three years away from the general election, popular support for President Dilma Rousseff ’s government stands at an all – time low . However, if the government and main opposition parties fail to deliver, we believe Brazil would be at risk of further adverse market dynamics , and, given its systemic impo rtance in EM (the second largest economy ), this would likely have a destabilising effect for the entire asset class.

We assess the vulnerability of Brazil’s public debt dynamics by : i) examining the likely evolution of fiscal policy in the next few years ; and ii) stress testing public debt under various macro scenarios based on plausible fiscal adjustment paths . We conclude that in the absence of significant fiscal adjustment, debt dynamics are likely to deteriorate significantly and may lead to further pressure on asset price.