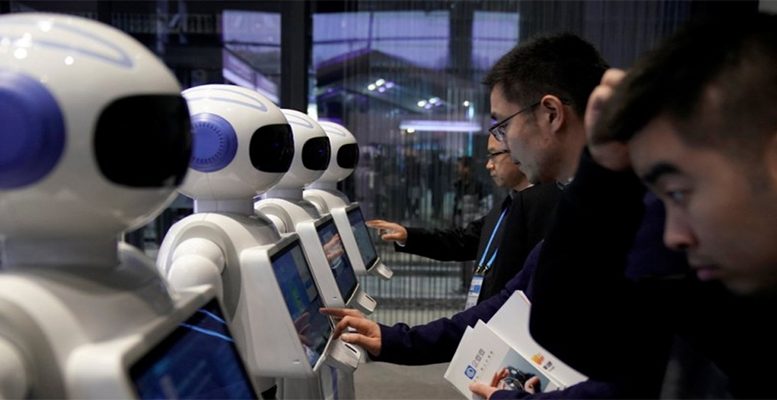 China is already challenging the US as the dominant leader in e-commerce, fin-tech, robotics

China’ s rapid economic convergence is well-documented but a similar catch-up on innovation has often gone unnoticed. “This is partly because of China’s developing-country status, which is not usually associated with where cutting-edge technology is developed”, explain economists at AXA IM. Yet, China ranks among the top 20 of the world’s most innovative countries, beating many developed nations, such as Canada, Norway and Australia, according to the latest Global Innovation Index by the World Intellectual Property Organization (WIPO). Moreover, the country is ranked first among its middle- income peers.

At the micro level, rapid growth in high-tech industries has created companies, like Alibaba, Tencent, Baidu and Huawei, which are not only household names in China, but are also starting to compete globally with giants such as Amazon, Facebook, Google and Apple.

Furthermore, according to some metrics given by AXA IM in the figure below , at 2.1% of GDP, China’s R&D spending is above the Eurozone average, of 1.9% ,and is second only to the US, in absolute terms.

Such investment s in R&D have allowed China to catch up rapidly on innovation output. In 2016, China produced just under 500,000 research publications, again second only to the US. While the quality of these publications is still beh ind the US , China appears comparable to innovation leaders such as the Netherlands and South Korea , and is not far behind Japan. Taking a step further down the innovation production chain, China is doing even better in turning R&D into patents. The latest WIPO data shows that China has already made its way to the top in both patent’s filed and granted globally in 2016.

This effectiveness of turning innovation inputs – defined as investments in human capital and infrastructure – to outputs has earned China the number three ranking in innovation efficiency in the latest Global Innovation Index.

The significant efforts to move China up the tech ladder are not just manifesting in the rising number of journal publications and patents, but also in real economic impact. By some metrics, as one can see, China is a lready challenging the US as the dominant leader in e-commerce, fin-tech, robotics, modern infrastructure and renewable – power generation.

On the macro level, this has also moved the economy up the value chain and helped to address some of China’s chronic structural problems . One clear sign of value-upgrade that AXA IM points is the industrial sector.Underneath the steady headline growth , industrial production (IP) between the “old ” and “new” segments has diverged markedly in recent years.

IP of the former (e.g. steel, cement and mining) has seen flat, or negative , growth over the past 12 months, while that of the latter ( e.g. robotics , automotive and semiconductors ) has grown at a stellar speed. This shift in composition has allowed headline IP growth to hold its ground despite the aggressive capacity cuts in many “old industries” in recent year. Another sign of value-upgrade is seen in trade. Two decades ago, China was the low-cost “factory of the world”, relying on selling apparels, footwear, toys and plastics to generate volume growth. Fast-forward to 2018, China’s export basket is now made up of mobile phones, computers, automobiles and semiconductors. The economy has clearly moved up the value chain, and started to compete for value, as opposed to volume, in more sophisticated segments of the global market.

Besides creating economic value, the rebalancing towards technology – driven growth can also help China to address its leverage problem. China’s debt, as it is well known by now , is concentrated in the “old economy” – in mining, steel and real-estate sectors. By contrast, balance sheets of more value – added industries that serve the new economy are considerably healthier , and ha ve in fact been reducing leverage since the global financial crisis.

A continued rebalancing towards a cleaner balance sheet should help China to improve its debt dynamics going forward. Finally, experts at AXA IM think that China’s strong push on clean energy should help it to restore environmental health.

China was home to almost 30% (563GW) of the world’s renewable energy capacity in 2016, with a clear lead in both solar and wind power generation. It has also been investing extensively to push the boundary of clean technology , receiving more than 40% of global clean-tech patents in 2016.

On the consumption side, significant government support has been devoted to grow the electric-vehicle market, which is now the world’s largest by sales. These changes in clean- technology have already alter ed China’s energy consumption mix, and are starting to have a favourable impact on the environment.