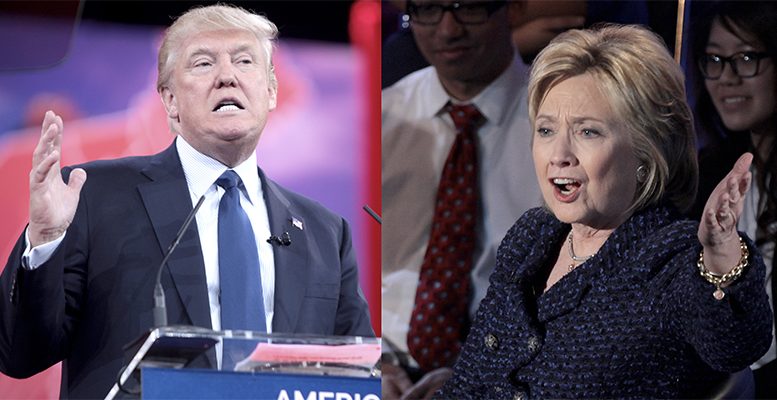 AXA IM | At the time of writing, Hillary Clinton enjoys a near 2 point lead over Donald Trump in the national polls. This lead had narrowed to almost a 1 point gap recently – the smallest since the brief lead Trump held over Clinton at the time of the Republican convention. The polls appear equally tight if we look at the likely battleground states.

Exhibit 1 highlights the recent variation in national polls while Exhibit 2 illustrates a mixed picture in terms of Clinton or Trump leads in key US states. These polls may change following Monday’s TV debate. The first televised debate between the two Presidential candidates was expected to be the most-watched in US history. The debate ranged across familiar topics, including Clinton’s emails, Trump’s tax returns as well as matters of policy such as plans to address ISIS3, the Federal Reserve, “stop & frisk” etc. The bulk of political analysts’ reactions suggested Clinton delivered a more comprehensive performance and had taken charge of the debate. Trump, however, while animated, avoided controversy in these debates. Financial markets appeared to concur with political analysts in concluding a modest ‘win’ for Clinton. What will count will be the general public’s reaction – with an expected record TV audience approaching Superbowl sizes. The public’s reaction could differ from that of professional pundits.

The question is whether Clinton’s performance last night will be sufficient to arrest the momentum the Trump campaign has appeared to enjoy in recent months. Trump had seen a steady recovery in the polls after losing material ground following exchanges with marine captain Kahn’s parents after the Democrat National Convention. Since then, Trump has managed to focus his campaign on less controversial issues and position his policies more closely towards Republican values.

Trump modified his economic manifesto, bringing it more closely in line with House Republican proposals and successfully promoting this recently at the New York Economics Club. Trump also had a successful trip to Mexico, including a press conference with Mexican President Nieto. Finally, Trump recently spoke about “peace through strength” and bolstering US military spending (uncosted). Such campaign adjustments have positioned Trump as a more traditional Republican candidate, which may account for his poll rebound.

At the same time, Hillary Clinton has suffered in the polls. Recently, this reflects Clinton’s health concerns: Following a period of speculation, Clinton was filmed collapsing after leaving a 9/11 memorial event early. After some delay, it was announced that she had been diagnosed with pneumonia. This has raised concerns about her wider health, given her age (Clinton 68, Trump 70). Time off to recover from pneumonia has also eaten into her campaign schedule. It has also revived concerns over trust, given the time it took Clinton to disclose these health issues.

Clinton has also been criticised for referring to half of Trump’s supporters as “deplorables”. While separately, she has failed to provide any new policy initiative to the campaign. All of these issues appear to be weighing on her support.

We also reiterate our concerns surrounding the accuracy of the polls themselves. Evidence from Europe suggests that shifting attitudes to social liberalness and anti- establishment trends have had an impact on European politics, but have not been well-captured in the polls. The recent Brexit referendum is just the latest example. If similar trends are underway in the US, this could add to the margin of uncertainty for the election outcome.

We await detailed polling in the wake of Monday’s TV debate. This could be the last significant impulse to the polls ahead of November’s election. Yet on the basis of polling today, and in the light of greater uncertainty surrounding the polls, November’s outcome appears in the balance.

We also consider how financial markets are reacting to changes in the election outlook, as suggested by changes in the national polls. Our assumption is that before March markets did not treat the prospect of a Clinton/Trump contest seriously. So we now concentrate on the six months or so of available evidence to judge recent market fluctuations to the evolving political outlook.

A priori, we expect a Trump outcome to precipitate some short-term retracement in risk sentiment. Specifically, we consider the likelihood of a drop in US equities driven by two factors. First, that equity markets have historically reacted most negatively to a change in Presidential party and to a split Congress – both of which would be possible under a Trump victory scenario. Second, that Trump’s policies contain the greatest political uncertainties, including equity-friendly corporate tax cuts, but also the potentially economically-damaging immigration and trade policies. Initially, we suggest markets would be uncertain as to which path Trump would follow and this uncertainty should weigh on stocks.

Equity markets show only tentative signs of reacting to the shifting outlook for the upcoming elections (as measured by polling). Next exhibit compares the month-on- month change in the S&P 500 with the difference in the polls (a positive value representing a lead of Clinton over Trump). Since March, there is a suggestion that equity gains have slowed at times when a Trump win has looked more likely. Other asset markets show clearer signs of reacting to fluctuations in the polls. The following exhibit illustrates movements in trade-weighted dollar, which have become increasingly correlated with the election outlook. A more detailed analysis suggests that this clear relationship for trade- weighted dollar is not as strongly reflected in major crosses like the yen and the euro. However, while some emerging market currencies exhibit a particularly strong relationship with the polls (including the Mexican peso, Malaysian ringgit, Philippines peso and Indonesian rupiah) a far broader range of emerging markets’. Rather, the broad-based nature of the positive correlation between the dollar and a number of currencies, including key currency pairings including the euro, Aussie dollar and Swiss franc, suggest to us a broader US dollar story. We consider this evidence that financial markets currently believe that a Trump election would be a positive for the US dollar.

Our conclusion for the dollar is further supported by an analysis of interest rate markets. A similar analysis to the above reveals a positive correlation between US Treasury spreads and international counterparts. This is particularly true in 2-year yields, but is also evident in 10- year yields. Running the same analysis for US credit markets revealed little apparent change in credit spreads (investment grade or high yield) associated with changes in the polls – beyond a mechanical adjustment reflecting changes in the underlying government rates.

However, we suggest that the dynamic for government bond yields is proving supportive for the dollar. To our minds, this illustrates that markets currently view Trump as more likely to result in higher yields and a stronger dollar – probably reflecting the large expected stimulus package that he proposes, rather than worrying about the possible negative impact of some of his other campaign promises.

This analysis reflects only the current co-movements in financial markets and election outcomes. In the event, markets may react differently. We continue to suggest that market behaviour will depend greatly not only on who is elected, but also how they (particularly Trump) behave subsequently. The behaviour of financial markets over the past six months gives us further confidence that after a period of initial uncertainty, markets are likely to consider a Trump presidency a boost to the economic outlook, something that we expect to send yields, the dollar and even equities higher. However, such a positive reaction could reverse quickly if Trump enacts some of his more extreme policies.