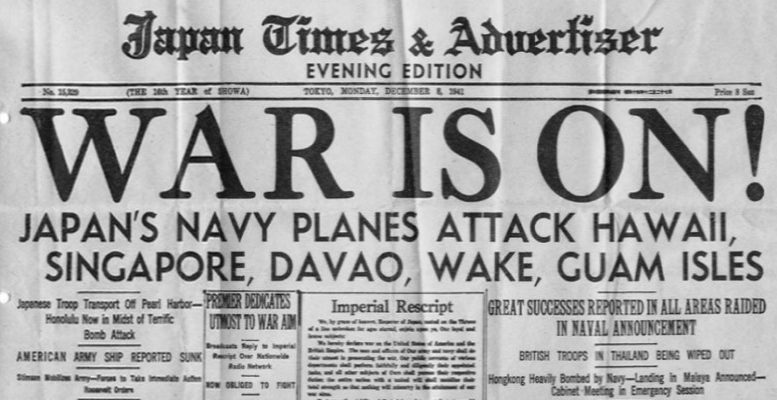 US and Japan issued war bonds during the war years.

To finance the war effort, the US issued $186 billion of war bonds, which provided the entire federal government with about three-quarters of its income during the war years. Taxes were raised also. But the lion’s share of funding came from borrowing, and the consequent run-up of the national debt, from almost 40% to 100% of GDP in four years.

A lot of money was printed too, say economic historians.

“The government used monetary policies to finance the part of federal spending that could not be covered by taxes. Wartime monetary policy helped the government to smooth tax distortions,” wrote Lee Ohanian, for The American Economic Review in 1997.  “The average growth rate of money (MI) between 1940 and 1946 was 18 percent, with a maximum increase of 30 percent in 1943.”

So to finance World War II. the US radically expanded the money supply, borrowed a lot of money, and raised taxes for a minor portion of outlays.  There was inflation, rationing and price controls during WWII.

Though rarely discussed in Western economic circles, Japan sidestepped the brunt of the Great Depression by adopting money-financed fiscal programs in the 1930s, which also helped finance its terrible programs of militarization and occupation (against the wishes of pacifist Finance Minister Takahashi Korekiyo, who was eventually assassinated).

As one observer put it: “In the 1930s, the Japanese economy suffered less from the Great Depression than most industrialized nations, its GDP expanding at the rapid rate of 5% per year. Manufacturing and mining came to account for more than 30% of GDP, more than twice the value for the agricultural sector. Most industrial growth, however, was geared toward expanding the nation’s military power.”

Japan’s GDP shrank on only one year, 1930, then resumed growth, sometimes vigorous growth throughout the 1930s—surely this was Japan’s first economic miracle, the one never discussed.

During the most-active war years, Japan did issue war bonds, and national debt to GDP rose from 100% to 200% of GDP, though bonds were then, as now, bought by the central bank, the Bank of Japan.

In those horrible times, Japan also financed its occupation of Southeast Asia through the issuance of military scripts, which was accepted by (repressed) local populations and authorities, and evidently was not inflationary in Southeast Asia, and cost the Japanese treasury and taxpayers nothing.

So, unlike the US, to pay for WWII Japan mostly printed money, and also used scripts to pay for some occupations and to buy local materials for shipment back to Japan.

With such heavy money-printing, Japan experienced World War II inflation, though, of course, there were shortages of everything in Japan caused by wartime conditions. As in the US, national authorities imposed rationing and price controls, making a reckoning of wartime inflation rates difficult. Besides all that, there were extensive black markets.

At the conclusion of WWII, Japan effectively wrote off its internal domestic war debts and bonds. Postwar conditions in Japan were miserable, industries and neighborhoods destroyed, and even starvation was possible. Again, there was inflation. Japan’s GDP fell by 50% with US occupation, in 1945. Finally, in 1950 Japan started on its well-known but second economic miracle, pretty much free of government debt.

By the early 1990s, Japan’s per capita GDP PPP eclipsed that of the US, though in subsequent years it fell below.

In a twist of history, Japan had so much post-war prosperity that by the 1980s it entered “the bubble economy,” in respect to both equity and property prices. Interestingly, during the 1980s bubble years, federal deficits were negligible, which must make the “deficits cause inflation” crowd somewhat uneasy.

In the early 1990s, Japan sank into deflation due to tight money and ran large federal deficits. In the last 10 years Japan has run both large budget deficits and heavy quantitative easing but cannot get to 1% inflation.

The best that Western economists can say about Japan is that it is an example to be avoided.  Oddly, it has been tight money, not money-printing, that has caused economic grief in Japan.

In Western macroeconomic circles, there is a disputatious reliance on federal borrowing and spending to stimulate economies, or monetary expansion, or some combination.

But Japan dodged the Great Depression, and then financed a huge and real economic expansion in WWII through money-financed fiscal programs and money-printing,

The military ends to which Japan put its money-printing were ghastly nearly beyond description, but the means remain interesting to this day.

In the next economic downturn, should not the Fed move aggressively, as Japan did in the 1930s, to kill the recession in the crib with helicopter drops? Why not?