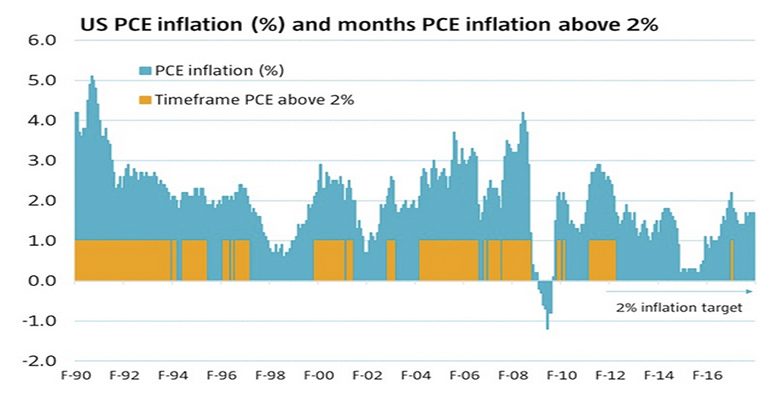 A world with less inflation

Robeco | Just a couple of years ago, deflation was a concern for US economists. And, although it’s true that this threat has almost disappeared, rises in prices have shown themselves to be surprisingly elusive.

Above all taking into account the unprecedented amounts of money which the central banks have injected into the markets over the last decade. The main unknown factor in this cycle has been the almost complete absence of inflation.

A world with less inflation

In January 2012, the Fed set an inflation target of 2%. Since then, its preferred parameter for measuring inflation (personal consumption expenditure or “PCE”) has been above 2% only 7% of the time. Meanwhile, between 1990 and 2011 – a period during which there were three recessions – the PCE index was over 2% for no less than 60% of the time (the areas in orange in the following graphic). Inflation has been so lethargic that the Fed is even considering making its target more dynamic. And the situation in the Eurozone is not much different. Since 2012, inflation has only been over 2% during 15% of the time, when between 1997 (when we start to have EMU data) and 2011 this rate was 49%. There is not doubt that the markets have become accustomed to low inflation.

Ideal equilibrium is over

There are, however, signs that things are beginning to change. The debt market linked to inflation is telling us that the risk of inflation is picking up. The implicit inflation or “BEIR” (Break-Even Inflation Rate), the differential between nominal and inflation-linked bonds, which reflects the market’s perspectives about future inflation, has been gradually rising since December. As this differential increases, acquiring coverage against inflation becomes more expensive, and in the case of the US, 10-year implicit inflation has once again risen over 2%. Trump’s government is implementing a fresh dose of budgetary stimulus to the US economy which is already “overheated”; it’s not difficult to understand why this market is preparing for a rise in prices.

And a small variation in real inflation can have a much greater effect on the inflation outlook. From the point of view of fixed income investors, that is what counts, particularly when credit differentials are at historically adjusted levels and gearing is on the rise. The fact is that having such low inflation for such a long time has given us a false sense of security. But it’s possible that there doesn’t need to be much for people to get worried – as we saw at the end of January – and the scenario of ideal equilibrium in fixed income, which is already retreating, founders.

The fixed interest markets have focused above all on core inflation in the US (excluding food and energy), given that it’s what better reflects the underlying inflation trend. Last year, this rate was surprisingly low, due to the fall in mobile telecommunications’ and health prices. In fact, during most of 2017, the lion’s share of core inflation came from rentals. This is changing. Inflation in the health segment is showing signs of life, and the prices of textiles and various services are also rising. Core CPI will probably reach 2% in April, and even the basic PCE, where rentals are less represented, seems as if it could get close to the 2% threshold. It’s also important to take into account that this forecast is based on a bottom-up analysis of inflation. A top-down analysis which includes the saturated job markets and the additional budgetary stimulus measures, would suggest that the risks could increase. Basing ourselves just on these bottom-up inflation perspectives, we estimate there will be four 25bp rate rises from the Fed this year, and the top-down trend shows that, if this isn’t the case, then it’s more likely that there are more than less.

The question is not really whether a serious inflation threat could make the Fed raise rates further, but whether the markets’ expectations will be able to leave their comfort zone. This cycle has been so different from other ones – gradual growth, gradual inflation, gradual rate rises – that any sign of normal cyclical inflationary pressure could easily spook the markets. Europe and the emerging markets are still a bit behind

Europe is at an earlier stage of the cycle than the US. But in the North of the old continent the labour markets are very solid and salaries have started to rise. For example, Germany’s IG Metal finalised a significant wage agreement in February, with annual salary rises of 3.5%. The ECB seems fairly reluctant to react to any incipient sign of wage inflation, amongst other things, because of the euro’s strength, which a rise in interest rates would not benefit. But could it happen that it needs to act? If the fixed income markets fall due to a massive sell-off in the US, the interest on European debt would undoubtedly feel the effect.

In 2017, the general trend in the emerging markets has been falling inflation, with declines in rates in Brazil, Russia and Indonesia. This has produced increases in debt markets denominated in local currency. We should point out the big exceptions to this decline in inflation, namely Mexico and China, where rates have gone up.

A return to “real” inflation

But is it not that there has not really been inflation in all this time? At least not in the traditional sense of inflation, measured according to the rise in salaries and its impact on consumer prices. There has been significant inflation seen in housing prices in many countries and, if we look at the financial markets, it’s obvious that many of their asset prices are also at very high levels. That is what makes the shadow of inflation instill such fear.

So then how can we position our funds for this situation? In global fixed income, we actively manage the duration of our funds, adopting a more defensive position ahead of upcoming rate rises. On the other hand, in our credit funds we have reduced beta and are keeping some powder dry to take advantage of possible massive sell-offs and buy securities we like, just as we did in the recent correction. Whatsmore, we have a clear preference for specific segments of the market. For example, financial shares are attractive ahead of rate rises, as they benefit banks and insurers. And, as volatility increases, our choice of issuances will allow us to capitalise on the greater dispersion in the market.