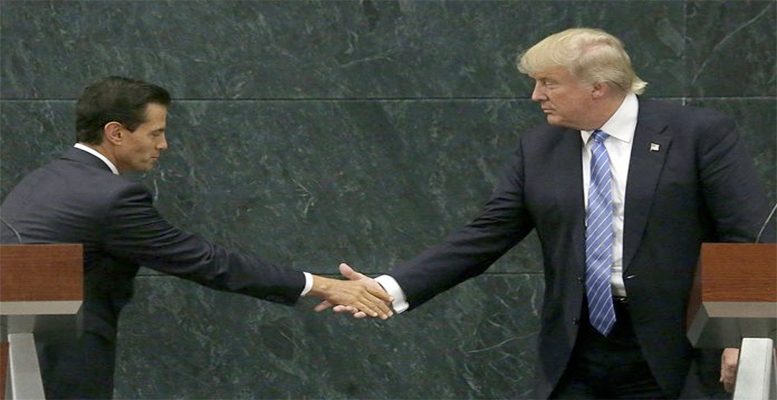 *This article was originally publlished by  Fair Observer.

Maria Fernando Tapia Cortés | Donald Trump has already built barriers around his relationship with Mexico that are higher than any wall. The diplomatic slip in the form of a tweet that ended with President Enrique Peña Nieto canceling their meeting was apparently fixed after the phone call between the two presidents held on January 27, in which they agreed to not talk publicly of the wall and expressed their desire to keep cooperating on issues like security. Tensions keep growing, however, as Trump’s promises turn into actions and confrontation with its northern neighbor becomes a serious possibility for Mexico.

What was seen as a bully’s message when Trump was still just a presidential candidate became a real issue when the now President Trump signed an executive order to build the promised wall along the US border with Mexico. And even though Congress estimates the cost at $12 to $15 billion, Trump insists that somehow he will make Mexico pay the bill.

His declarations were immediately answered by President Peña Nieto: “Mexico does not believe in walls. I have said it many times: Mexico will not pay for any wall.” In a video distributed on social media, Peña Nieto added that he regretted and condemned the US decision to continue the construction of a wall that for years “has divided us instead of uniting us.”

Soon came the POTUS tweet repelling that if Mexico was unwilling to pay for the “badly needed wall,” then it would be better to cancel the upcoming meeting, and his Mexican counterpart did just that—also via Twitter. Trump would later tell Republican lawmakers in Philadelphia that it was a mutual decision: “Unless Mexico is going to treat the United States fairly, with respect, such a meeting would be fruitless, and I want to go a different route. We have no choice.” He also repeated that the American people would not pay for the wall and proposed taxing Mexican imports with 20%.

Giving in over this issue is not an option for both Mexico and the US. Agreeing to avoid the topic publicly was the better solution at the time, but now both sides fear that their respective leader will not keep his promise.

Actually, Mexico’s biggest concern is that Donald Trump actually accomplishes all that he has said about the US relationship with the Mexicans. However, America’s southern neighbor isn’t as weak as it seems. Both countries are dependent on each other and, therefore, have cards to put down on the table. This is why it took so little for Trump and Peña Nieto to call each other and promise cooperation.

The biggest threat isn’t the border wall—actually, one-third of it already exists. The real menace is the barrier to commerce that might come with an eventual renegotiation of the North American Free Trade Agreement (NAFTA)—another of Trump’s promises.

The mogul president insists that the trade pact has led to a massive loss of American jobs as companies leave the country looking for investment opportunities and lower salaries in Mexico. The agreement has indeed allowed Mexico to draw foreign capital in and make its industry grow. Commercial deficit is also a fact: In 20 out of 21 years, Mexico’s sales have surpassed its purchases. However, this follows market dynamics rather than being an effect of the trade deal. NAFTA has given the United States as many benefits as to its neighbor.

According to the Office of the US Trade Representative, trade between both countries amounted to more than $530 billion in 2015. Mexico is America’s third biggest trading partner and number one for states like Arizona, New Mexico, Texas and California. Texas alone exports $95 billion worth of good each year to Mexico, which equals 37% of total its global exports. The jobs of 6 million Americans depend directly on exports to Mexico. So do many of its industries that use imported parts to complete production. In fact, according to the National Bureau of Economic Research (NBER), this includes items for the Trump brands.

However, if an abrupt break from NAFTA will definitely hurt the US, for Mexico it may prove devastating. The US is by far its most important trade partner, representing 66.5% of its total international commerce. Since NAFTA was passed, the value of Mexican goods sold to the US has risen by 638%. Today, some 6,000 companies and 10 million jobs depend on its viability. If it is dissolved, all those people will lose their source of income, and jobs created by the multinationals that Trump has promised to attract might not suffice to employ them.

It is exactly this asymmetry of what President Trump has in mind when he talks about negotiating with Mexico. A fair update of the treaty might benefit all its members, but he seems to be seeking more draconian changes, like eliminating Mexico’s trade surplus with the United States, limiting investment by American multinationals in its southern neighbor and adding a 35% border tax on its products. If that happens, Mexico’s best option might be to leave the agreement altogether, just as Secretary of Economy Ildefonso Guajardo said.

Cards on the Table

With Canada staying out of the discussion and the rest of its allies silenced, Mexico has been left to fight for its future alone. However, just as the former Foreign Secretary Jorge Castañeda said, the land of charros (Mexican cowboys) has got many chips to play.

Border security, terrorist threats and trafficking of illegal drugs, weapons and cash are only a few reasons of why the US needs a good working relationship with its neighbor, as the White House stated officially after the call between the two presidents. Bringing uncertainty over Mexico’s willingness to keep cooperating on these issues might be a great strategy to make Trump think twice about dismantling NAFTA, explained Eduardo Porter in The New York Times: “Will Mexico still cooperate in the fight against drug trafficking? Will it stop foreign terrorists from using Mexico as a way station into the United States? — Mexico can raise the stakes enough for Mr. Trump to reconsider his ‘America first’ approach to commerce.”

According to Porter, Jorge Castañeda seems to agree: “‘Let Mr. Trump pull the United States out of Nafta,’ he argues. Instead of stopping Central American migrants at its southern border, Mexico should let them through on their way to the United States. ‘And let’s see if his wall keeps the terrorists out, because we won’t.’”

An even stronger (and riskier) tactic is playing with Trump’s desire to get a quick deal. Let’s put it this way: A victory over Mexico will make the new president look strong, leaving him in a good position to face China and other forces. Even if he can’t make a strong move against Chinese President Xi Jinping, he will have the Mexican issue as a flag to keep his voters happy. But if Mexico stands its ground and even lets NAFTA dissolve, it will send the world another message: Trump’s threats can be resisted.

This, however, is easier said than done. With his approval dwindling, Mexican President Enrique Peña Nieto is between a rock and a hard place on this issue. He cannot afford to leave NAFTA easily, especially because some of his most unpopular policies rely on the success of free trade.

The dollar-peso relation is another weak spot in Mexico’s position. The national currency has fallen from 15 pesos per dollar when Trump started his campaign to about 22 pesos per dollar today. Considering that his tweets have impacted this percentage on several occasions, it is not an exaggeration to say it might fall to 40 if Mexico leaves NAFTA, which will kill efforts to attract foreign companies to the country. Actually, Trump’s threats have already made Ford and GM cancel long-planned investments in Mexico.

Despite this scenario, not everything is hopeless. Without NAFTA and the Trans-Pacific Partnership (TPP), Mexico has still got one of the highest number of free-trade treaties around the world. It is the perfect timing to strengthen relations with other allies—starting with China, whose authorities have already declared themselves in favor of doing business with Mexico. Being too positive, this might also inspire a boost to the country’s domestic market.

As for the 20% taxes on Mexican imports that Trump is said to be considering, he will have to deal with America’s laws first and then the World Trade Organization’s (WTO) second before making it a reality. Furthermore, any increase in fees will be paid by American consumers. Mexican producers might only suffer indirectly under the logic that an increase in their prices leads to lower sales, which is unlikely to happen on basic products like tomatoes and avocados. Some hope the initiative will not pass, but that is what was said about the building of the wall.

An attempt to respond with an equal tariff on the southern side of the border might also be a good argument toward negotiation. “If Mexico puts a tax of 20% over American wine and alcoholic beverages, the most damaged would be the US,” stated Iván Franco, founder and director of the consultancy firm Triplethree International. However, getting into a tax battle isn’t at all desirable. We have already experienced something similar in 2009, when Mexico put a 10% to 20% tax on northern products after America violated a NAFTA provision, and both parties suffered as a result.

What has to be kept in mind is that Mexico does not want to go to war with the United States. Both sides are simply looking for a more profitable deal. Just as the Mexican magnate Carlos Slim pointed out, the new US president is not a terminator but a negotiator, whose style it is to crush the weak and talk with those he respects. If Mexican authorities stay firm, Trump will look for an easy deal, and they will be able to insist on their terms. If not, both economies will have a hard time prospering under Trump’s tenure—and so will their relationship.

*This article was originally publlished by  Fair Observer.