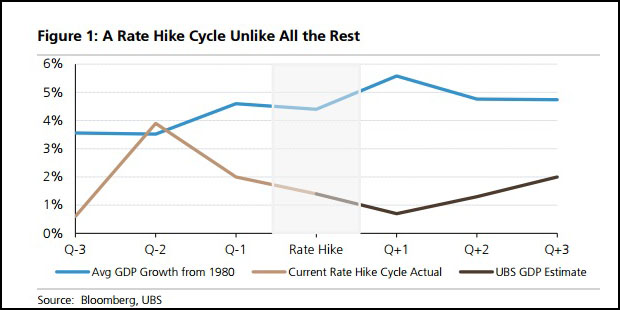 UBS | S&P 500 consensus expectations call for -8.1% earnings growth in 1Q2016, the largest decline since the Financial Crisis. While results should beat as usual, YoY forecast declines for 7 of 10 sectors (not just Energy, Materials and Industrials which have explained most of the earnings weakness of the last 18 months) make it unlikely that positive price reactions to “better than expected” will be an upside catalyst for the broader market. This is all the more likely given the rally since February and the plunge in risk perception (VIX) against the backdrop of a forecast 2Q earnings decline.

What could outperform with such a defensive setup into earnings reporting season? With rates expected to move higher over the balance of 2016 (UBS forecasts 2 Rate hikes in 2016 and a year end 10 year yield of 2.0%), despite an acceleration in economic growth typical of the start of Fed rate hike cycles (Figure 1), the “demise of Growth (stocks)” has been exaggerated. Meaningful as well will be guidance; after a downbeat 4Q, optimism could be rewarded though likely more so for sectors such as Financials which have underperformed as opposed to Consumer Staples, defensives trading at premium valuations where a weaker dollar boost may be transitory.

The tale of 1Q2016 earnings season looks to be one of “What you see is what you get” with regard to the prospects for earnings growth. In this context, we screen for UBS covered stocks which have underperformed the S&P 500 by 5% or more YTD, have earnings growth forecast greater than 10% in 2016 with forward P/E below 20 or PEG less than one – Growth at a Reasonable Price, GARP. As well, we identify stocks in the UBS coverage universe which are expected to show YoY earnings declines in 2016 and have outperformed SPX by more than 5% YTD – Earnings Overachievers – details on pages 6-8. To position for prospective Financials outperformance through earnings season and beyond, investors could consider buying the XLF (Financial Select Sector SPDR) July 23 calls, whereas the view that good news is fully priced into Consumer Staples could be expressed by buying the XLP (Consume Staples SPDR) June 52p/48p spread versus selling the June 54c – a put spread collar.