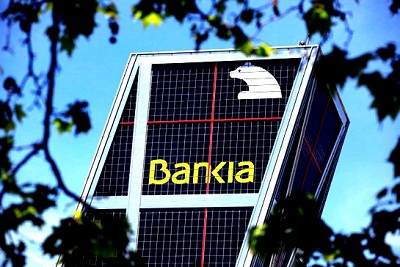 By Julia Pastor, in Madrid | The financial markets were anxiously waiting for explanations about the much talked about doomed Bankia. The Spanish minister of Economy Luis de Guindos spoke at last. He said that the State will support Bankia’s solvency with all the capital the entity may need. According to De Guindos, Bankia will need at least  €9 billion to meet the latest reform’s requirements. This figure includes €7 billion for extraordinary provisions and €1,9 billion as a capital buffer. During his speech, the minister even admitted that

“Bankia’s merger as well as its IPO were a mistake.”

In a note to investors, Santander analysts reflected Thursday the stages that Bankia’s recapitalisation will have to go through. Firstly, the new management board will present a viability plan and then they will execute the conversion of the aid from the Banking Restructuring Fund (FROB, in Spanish) into shares. By that moment, the bank will be a state-owned entity, so that it will be recapitalised through a capital increase entirely subscribed by the FROB. In Santander experts opinion,

“it will be done via shares, not via the so called cocos,” which refers to convertible and contingent instruments.

Finally, after the liquidity injection to the parent company Banco Financero y de Ahorros (BFA), Bankia will be subjected to a capital increase with a preemptive subscription rights for current shareholders and totally guaranteed by BFA. The government stressed that Bankia’s situation is very different from the rest of the banking sector given its systemic nature.

“In this sense, the measures taken for this entity cannot be extrapolated to any of the other Spanish banks,” explain the analysts.

The markets have estimated BFA-Bankia’s recapitalisation needs at up to €13billion-€17 billion, an amount that could increase as a consequence of the financial assets independent valuation.

On the other hand, considering that Bankia as well as CatalunyaCaixa y Nova Caixa Galicia will all become state-owned entities, Sabadell analysts estimated

“the state could manage appproximately a 20% of the Spanish banking sector at the end of the restructuring process.”

In their opinion, “it would make sense merging the three entities in a future national bank, which once reorganised, became privatised again.”