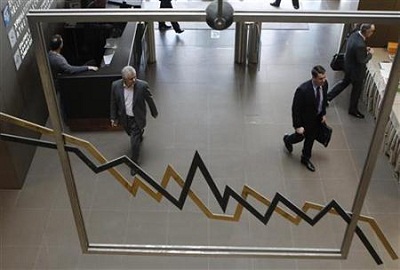 LONDON, MADRID | Ireland and Greece appear this week at the opposite ends of the rainbow. Santander credit research team painted Thursday an optimistic picture in its investors’ note based on the news that LHC.Clearnet has cut down by 10pc the additional margin it requires, which was 25pc, for positions in Irish government bonds cleared through its RepoClear service. A more relaxed market environment has also prompted Ireland to increase asset sales to €3 billion, once creditors have agreed to reinvest part of the cash into the economy instead of only reducing the debt burden.

Greece’s cloud, though, looms over any considerations regarding euro zone country members and their market dealings:

“While the Greek Private Sector Involvement PSI plan is being discussed in Athens, the question about applying a similar haircut on Irish and Portuguese sovereign bonds has made a comeback. We hope a balance between peripheral euro countries committing to austerity budgets and a higher bailout fund will diminish any contagion risks.”

Experts at Santander emphasise that Greece isn’t alone in having some parliamentary work ahead, pointing at Finland and Germany, which leaves the uncertainty window open. Unless the Greek PSI’s collective action clause is triggered, they think ratings will remain as they are at the moment, and bank financing will not suffer thanks to the European Central Bank 3-year liquidity operations.

Be the first to comment on "LHC.Clearnet cuts down by 10pc the additional margin for Irish bonds"