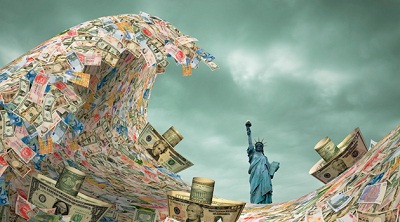 LONDON | US corporate borrowers have nearly $3 trillion in rated debt that will mature by year-end 2016, according to risk agency Standard & Poor's estimates. In its June report about refinancing needs in the US, S&P analysts said the overall issuance volume in the US is sufficient to refinance this term schedule, but there could be foreseen potential friction for two areas of the corporate credit market: the lowest rated nonfinancial issuers and financial institutions.

Financial issuers account for the highest share of maturating debt, with $1 trillion in bonds and loans coming due within the next 4.5 years. Given the robust volume of issuance over the past two years, S&P stated that there would be sufficient liquidity and investor demand to refinance the looming debt obligations. However, fears of euro zone contagion, a harder-than-expected landing in China's economy, and a potential economic slowdown in the domestic market could dramatically reduce investor demand for risky assets over the next few years.

l Deposit Insurance Corporation guarantees approximately $100 billion of the $273 billion coming due during the remainder of 2012.

“Investment-grade financial firms are responsible for more than 90% of the debt maturing each year through 2016, with banks and financial institutions owing the vast majority.

Investment-grade financial companies' issuance has averaged near $200 billion a year over the past two years, though the market was able to support issuance of more than triple this amount in boom years of 2006 and 2007.

“While we believe credit markets have the capacity for investment-grade financial institutions to refinance their pending obligations, there is little headroom at current issuance volume should market conditions turn against them.

“As we mentioned in previous refinancing studies, higher funding costs are a key risk for investment-grade financial entities. However, yields are currently at the low end of our expectations and have been declining since the beginning of 2012, after a spike amidst volatility in third-quarter 2011.”

Continued strong demand for U.S. Treasuries as a safe-haven security and the Federal Reserve's accommodative monetary policy have helped bond yields move lower since 2011. Though financial institutions have benefited from this trend toward lower yields, they still pay a premium relative to nonfinancial companies.