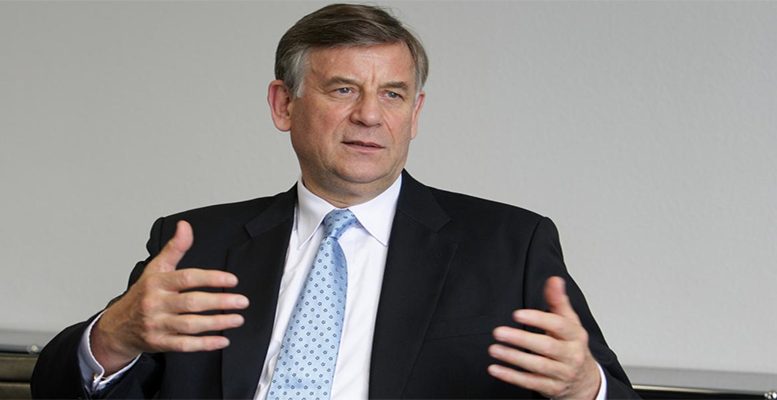 “…One of the reasons for the high level of youth unemployment in Spain has to do with the fact that companies hardly get involved in the dual training system,” explains Hermann Simon the chairman of Simon-Kucher, the preferred consultancy firm of the “hidden champions,” those German mid-cap companies which compete globally. “Spain’s level of innovation is very weak…the whole country cannot live just off tourism services. It urgently needs to increase and consolidate its industrial base.”

Q: What do you think about the change of direction taken by the US and the UK?

A: In the short term, there will be hardly any relevant changes. In the long-term, the effects will depend on concrete policies. If Great Britain disconnects from the EU or the EU imposes a hard Brexit, this will have negative consequences for both sides. The same can be said about the US, in the event President Trump imposes the protectionist measures announced during his campaign. Don’t let’s forget what happened in the 1930s. The protectionism dictated by the US was the main reason for the deep and long depression. On June 17 1930, it approved the so-called Smoot-Harley Tariff Act which imposed tariffs of up to 60% on over 20,000 products. Although at the time over 1,000 economists signed a petition against it, Parliament abruptly approved that tariff. The response from the rest of the world was to protect itself in a similar way via tariffs. Global trade fell by half in a few months. In one fell swoop, the advantages of the international distribution of work were eliminated.

Q: Germany is key for Europe. If Germany goes well, Europe can do the same. How do you see its future faced with the new challenges of globalisation?

A: It’s clear that Germany is one of the main beneficiaries of globalisation. Imagine…its exports represent 50% of GDP. A very high percentage. This means that the current protectionist trends could hit its economy hard. On the other hand, we have to remember that many German goods and services are irreplaceable. The so-called hidden champions, the mid-cap companies which are leaders in the global market, have a very high level of technology and strong market shares. They sell machinery and equipment, spare parts and complicated services like maintenance and technological facilities. Furthermore, German companies are present in all the strategically relevant countries with their own subsidiaries, which have their own production plants. This is where we are different from China. Chinese goods can be found across the world, but Chinese companies are not yet global. They sell to the world via intermediaries.

Q:This is the great strength of the Germany economy. What were the pillars of this boom? Could Spain copy this industrial model?

A: The success of Germany’s export industry is due to many factors. The first one is the ambition that many companies have. This makes them very specialised. But as that implies a very small market, their next step has been to reach a big market. In other words, sell globally. For that purpose they created their own subsidiaries. Another prerequisite for leadership is to constantly innovate and be close to the customer. And for this you need highly-qualified personnel who are loyal to the company. These are strategies which can be learned. In Spain I have noticed that many businessmen are satisfied with their local success. But in a global world this attitude can be dangerours. The key is to combine specialisation and internationalisation, without forgetting employee training. I think Spanish industry has been opposed to implementing the dual training system, which allows for complementing theoretical training with practical training in the company. And that is terrible. One of the reasons for the high level of youth unemployment in Spain has to do with the fact that companies hardly get involved in the dual training system,”

Q: For many people, globalisation is to blame for all the bad things…

A: It’s true that globalisation implies a reshuffling of the cards across the globe. But if we talk about the  fate of the industrialised countries, I believe those who have lost out because of globalisation have themselves to blame to a large extent. France has not been able to reform its labour market and eliminate the rigid system of 35 hours a week. In the US, the automotive industry has failed because of its poor quality and lack of innovation. Spain does very little to promote a dual training system adaptable to the needs of industry today. That’s how you lose global market share and well paid qualified workers. And the populists can promise all they like, but without these reforms neither these countries nor industries will advance.

Q: How do you see Spain?

A: Spain is not doing badly. From 2000 to 2008, unit labour costs rose over 30%. In Germany only 10%. But since 2008, labour costs have declined a lot. This is not the case in France or in Italy. So Spain has been able to boost its competitiveness. But it’s not enough. Spain is very weak in terms of innovation. While Germany has registered 1,627 patents per million of inhabitants in the last 10 years, in Spain’s there have only been 86. The whole country can’t just live off tourism services. It urgently needs to increase and consolidate its industrial base. And to do that it must invest in R&D and in better training. And attract foreign investment. It did that after it joined the EU in 1986, but now international competition for investment capital is much tougher.

Q: You once predicted that by 2030 there will only be three global powers: the US, China and the EU. Do you think the same after Trump?

A: Let’s see what happens in the US. I don’t think it will isolate itself. They are not so stupid. And China won’t do it either, for two reasons. Firstly because this country has still a lot to do. For example, think about its biggest problem, namely the environmental challenge.  And secondly because China depends on exports. Between the EU and China, Europe is the region which is the most priviliged in geostrategic terms. We can call Tokyo and San Francisco during our normal office hours. In under 12 hours we can be in Japan and on the US west coast. So globalisation will continue and Europe will benefit from its location. We are also leaders in technology. Think about Airbus or the robotic car. Of all the patents registered in the world since 2010, 58% come from Germany.

Q: You are very convinced about the future of Europe…

A: The fact is I am surprised that the advantages of being in Europe are not obvious. I was born in 1947 and have always lived in peace times. No European generation before mine can say the same. It may be that people today take that as a given and its importance is not talked about enough. But there are also the practical advantages: the same currency, freedom of movement without any controls. Europe is not repsonsible for the problem of distributive justice. Without Europe, people would be worse off, not better.

Q: And what about the euro?

A: We have the euro and we must get the best out of the single currency. I can’t imagine it failing. It would be the biggest accident for Europe.

Q: And what about the next crisis?

A: Undoubtedly there will be another crisis. But when and where will it start? What is worrying is the rise in the amount of money. At some point inflation will appear. And when they raise rates, public and private debt will soar. It’s a powder keg….Let’s see if we can deactivate it before it explodes.

Q: What does Europe need to do?

A: Continue along the same path unfazed. Bet on free trade, eliminating trade barriers in Europe and reaching fair agreements with third parties to facilitate, for example, the export of agricultural products from Africa and the emerging countries to Europe. We should not have our own equivalent for Trump’s slogan “America first”. On the contrary, the 1.5 million Africans born from now until 2050 will be knocking on our door.