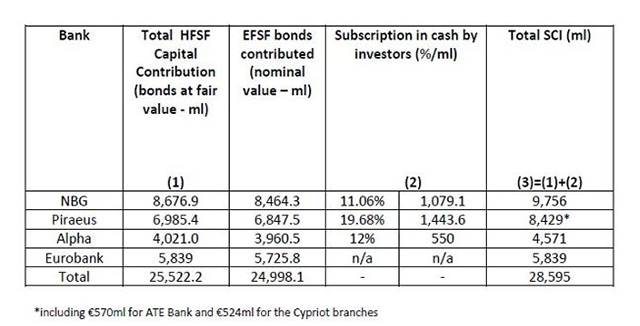 Those bonds were previously held by the Hellenic Financial Stability Facility (HFSF). They will continue to be available for the 4-month extension period and can only be used for bank recapitalisation and resolution costs upon request by the ECB’s Single Supervisory Mechanism (SSM), according to the Eurogroup statement.

HFSF share capital stands at 49.7 billion euros, of which 1.5 billion was initially injected in the form of cash and the remaining 48.2 billion in EFSF bonds. The initial agreement provided for the return of the EFSF bonds upon the completion of Greece’s eurozone bailout programme.

In the fourth quarter of 2014 the previous government was reportedly planning to retain 2-3 billion for potential future capital needs and return the remaining amount to the EFSF.

Earlier this week [the original article was published on March 27] the Greek government made an official request to Eurogroup President Jeroen Dijsselbloem for a return of 1.2 billion (of the 10.9 billion) since a part of Greek bank recapitalisation and resolution costs was covered by cash.

Thus, subtracting the 40 billion euros from the 49.7 billion HFSF share capital, we get 9.7 billion that should be left aside and theoretically returned to the EFSF. However, the amount of EFSF bonds held by the HFSF was higher (10.9 billion) as part of the money paid for the non-core banks was in the form of cash.

Since being established in July 2010, total cash accumulated by HFSF reached 3.62 billion euros. This was made up of 1.5 billion from the initial cash injection plus the fund’s proceeds of 2.12 billion over this period, with the bulk of them collected as of 2012. This mainly relates to:

d) Exercise of warrants from investors (more than 350 million)

e) Proceeds from liquidations of around 470 million

Be the first to comment on "Why Greece is asking for 1.2 bln back from the EFSF"