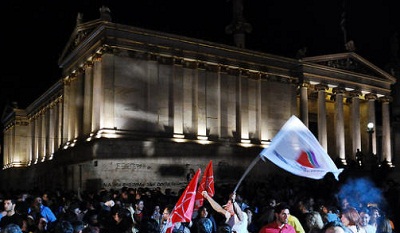 JLM Campuzano, Citi strategist, in Madrid | I read half surprised, half indignant, that a competitor released today an investor note in which the pending exit of Greece from the European Monetary Union is given a week as a deadline.

The arguments are all too well known: the Hellenic authorities have already breached the adjustment plans, the country’s political parties will not come together in any of the urgent agreements and the markets have a euro breakup priced in.

Yet, the truth is that no one can forecast with any certainty what is next in the sorry economic and financial saga of Greece. This is probably the biggest fear the markets feel right now. The final decision will be a political one, made within the context of the European political scene.

But it is striking how the decline in confidence over Greece, and indeed over the euro area, is now in itself a major risk factor. In my opinion, it is one of the largest negative factors in the last four years of crisis, even if not the worse. However, it has become important enough not to dismiss extreme measures by central banks.

This week there were some rumors, unfounded in the end, on liquidity operations, swap in US dollars and an intervention by major central banks in developed markets. Amid the confusion of it all, we saw the stock markets go from negative to positive, and from positive to negative, again.

The best example for a second day was the US stock market, which recovered the positive sign at the end after spending all day in the negative. The Dow rising 0.27%, the S&P rose by 0.14% but the Nasdaq lost 0.38% in the end. In applications the S&P was cut by 0.2% to 1318 points. Make no mistake, though: US markets keep relatively stable, on the upward trend, but also with a strong demand for fixed income. How about some data? Sure; demand on Thursday in the auction of $29 billion in 7-years bonds was 2.8 times higher than the offer, with a yield of 1.203%. This week the US Treasury has placed nearly $100 billion in paper at 2, 5 and 7 years with an average demand of 3 times the official placement.

Public debt in custody by the Federal Reserve owned by other central banks increased this week by $3.8 billion. But the actual increase is of $16.8 billion, considering also the debt of the agencies. Overall, more than $3.5 trillion in the Fed portfolio.

And we witnessed the lower interest rates this year. Currently, the 10-year bond yields is at 1.75%. However, it is true that many investors, especially private ones, are still confused about these low yields. Where should they allocate their money then? During this week we saw outflows of cash, if marginal ones ($1.7  billion) from investment funds in fixed income, but equity funds have seen tripling this figure.

Asian stocks fall at this time on average by 0.7%, hitting the lowest level of the year. What is dragging down Asian investors? Europe. The risk of Greece’s euro exit, and the apparent lack of political understanding on how to prevent it or adapt to it.

Some analysts at S&P anticipate that the so-called Grexit can be disastrous for Greece but may also increase the risk of a banking crisis in the peripheral countries of the euro zone. In their opinion, the important factor in this case would be the reaction of the markets and clients regarding the deposits of banks in these countries. Something to bear in mind. On the other hand, the triple A rating of Germany and UK seem not to be at risk.