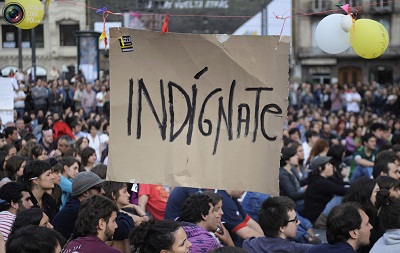 By Juan Pedro Marín Arrese, in Madrid | For all the efforts to revamp a sluggish economy by bold reforms, Spain is failing to impress investors. They have the feeling that cleaning up the massive stock of repossessed property and bad loans in banking balance sheets will amount to a much higher bill than the one announced by government. Double the €50 billion figure at the very best. No wonder they have taken as usual business the severe downgrade inflicted on the financial system ratings across the board. Credit agencies are simply mirroring the sharp deterioration in growth prospects that will sooner or later dent profits and solvency.

Reforms undertaken so far do not add any hope for a swift change in the underlying trend. The financial one will entail a subdued credit offer as scarce resources are used to cover risks and reshuffle portfolio. This will further dampen any hope for an early recovery. The labour reform will on the other hand sharply curtail private consumption as everyone employed fears being sacked or facing lower salaries. For all its inner merits in terms of flexibility, it has been implemented in the worst possible scenario when losing your job amounts being in the dole forever. Internal expenditure will shrink dramatically with little hope  of export of goods and services taking over to fill the gap. Snowballing will lead to closures and mute activity. Guess who might be tempted to hire extra workers in such circumstances? The reform, far from creating job opportunities, will lead to a higher unemployment rate.

The government refrains from making the only sensible reform at this stage: fostering growth. Should it follow orthodox views now prevailing in Europe and impose a severe austerity package in the forthcoming budget, it will only fuel further depression, higher unemployment and increasing financial instability. Growth is not so far in the agenda, thus contributing to make problems increasingly acute. Let’s hope this self-destructive policy is shelved the sooner the better. Otherwise we might slide into an untenable social and economic situation. Take a bet. This government is not to stay for long in place. Its seams will soon start bursting.