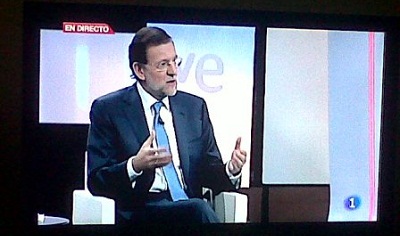 By Carlos Díaz Guell, in Madrid | Pedro J. Ramírez, editor of the Spanish newspaper El Mundo, wrote at the beginning of this month a terrible diatribe in the paper edition against president Mariano Rajoy. It wasn’t the first time, and Ramírez isn’t alone, either. Today Rajoy is surrounded by a harshly critic choir of news media titles from a diverse ideological identity but equally opposed to the way Spain’s president is managing the crisis.

The international media seem to hold a similar view. The Financial Times, for instance, has devoted a tough editorial article accusing Rajoy of having forgotten the general interest of the Spaniards and be instead worried about the electoral consequences of his decisions for his own political party. The Corner itself has not been short of contributions from Madrid-based economists eager to explain in English to our global readers why Rajoy has consistently been wrong in most occasions in his dealings in Brussels.

It is one thing when the sector of the Spanish media that we identify as most friendly with opposition parties become a ferocious attacker against the policies of the government and the party that governs. It sadly falls within the routines of Spain’s media behaviour, and it is often so on behalf of values contrary to good, professional journalistic practice. Spanish news consumers have somehow learnt to separate propaganda from well-researched opinions.

But it altogether is another matter to observe how media supportive to president Rajoy in his election campaign and habitually placed over the conservative and centre field of Spanish politics turn against him for his actions and even his tactics in carrying them out. The eroding voice of the news media in Spain is nowadays heard relentlessly.

Rajoy’s crisis management needs a profound rethinking, as much as the government and his party must review their communication policies. Some criticisms come from extremist, ultra-minority groups, but most have mainstream news media bylines. These, too, need to pause for reflection: the divide between journalistic duties and pleasing the masses looks excessively thin in Spain.