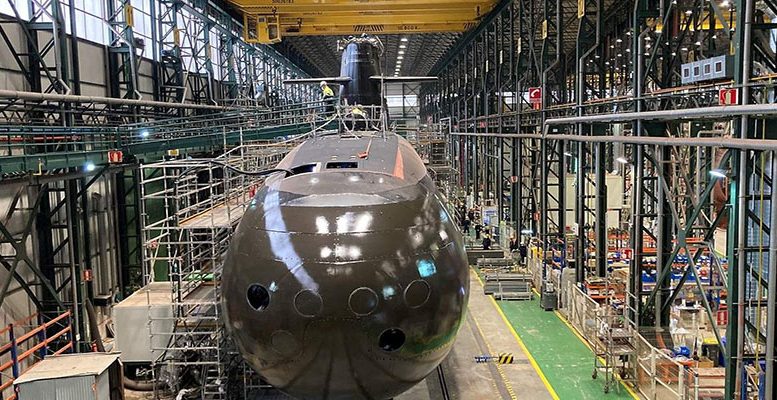 T.C. | Next Thursday, April 22, in Cartagena (Murcia), King Felipe VI will preside over the launch of the S-81 Isaac Peral, the first submarine built solely by Spain. (Until now the development costs were shared with other countries, specifically France in the case of the latest submarines). S-81 Isaac Peral will be sponsored by the King’s daughter Leonor, Princess of Asturias and heir to the throne.

The S-80 project, developed by the public shipyard Navantia for the Spanish Navy, envisages the construction of a further three submarines, like the one to be launched on the 22nd. It is expected to begin its sea trials next year, with a delay of 10 years with respect to the initially planned schedule. In addition to the delay due to the pandemic, the project has had to overcome many difficulties, such as the 125-tonne excess weight that prevented it from floating, detected in 2012. This meant it had to be lengthened by almost 14 metres to regain buoyancy. So the vessel now has a length of 81 metres and a beam of 7 metres, and displaces 3,000 tonnes, with 32 crew members and an immersion depth of up to 300 metres.

Of course the delay has increased the costs of the S-80 project by 1.77 billion euros more than expected to 3.9 billion. Whatsmore, it has not been completed. The reason for this is that the novel propulsion system that Abengoa (now pending rescue) and Navantia are developing, to extract hydrogen from bioethanol, will not be ready until the third S-80 is built. Despite all this, Navantia has assured that the Isacc Peral will be the most advanced non-nuclear submarine in the world, with the capacity to remain 15 days without surfacing.