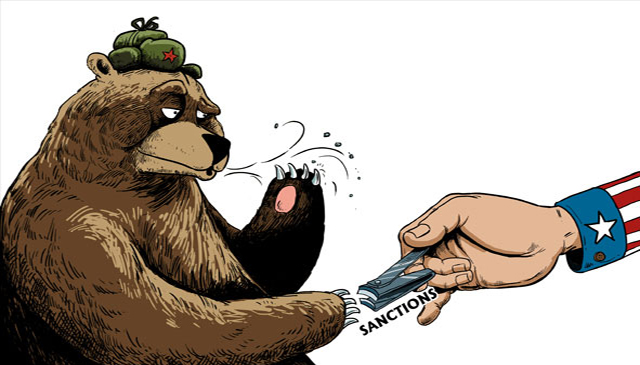 To the facts – the annexation of Crimea, the downing of a commercial airliner or the incursion of Russian troops on the Ukrainian territory- followed once again a threat full of political tightrope walking. So, at the end of the EU summit on August 30th, the Council President, Herman van Rompuy, said on the one hand that there is no “precise criteria” to activate the new economic sanctions. But then, contradictorily, he stressed:

“Everybody is fully aware that we have to act quickly given the evolution on the ground and the tragic loss of life of the last days and probably the next ones given the military situation.”

The words can not hide that the chances are limited. At the moment there are two kinds of sanctions. The first consisted on the seizure of assets and bank accounts and revoking visas to personalities close to Putin or involved in the annexation of Crimea. Right now the European list adds 87 people and 20 companies and organisations. In July, the first economic sanctions were approved as a suspension of EU funding to certain Russian public companies. Certain transfers of technology were restricted and some restrictions were also established on European investment in Russian companies.

There is the possibility to deepen the last ones. But there is also room for a new kind of sanctions in the area of energy technology transfer or financial transactions overcoming the reluctance in UK and Germany. And almost everything still remains to be done in the area of military sanctions.

So far, the sanctions adopted always seem to be late and have had little effect. Maybe because deterrence is exercised in different levels. Europe is reacting to Russian incursions in eastern Ukraine with economic sanctions because it entirely rejects a military intervention. And although Ukraine would resign itself for now with aid in the form of military equipment, no one has responded affirmatively yet.

Putin has always been one step ahead. He has been able to annex Crimea without the implementation by the EU of  any simple economic sanction against Russia. It was not until the demolition of the Malaysia Airlines flight in July when the EU28 gave this step. Without any result. Moscow has even counterattacked. The presence of Russian troops on Ukrainian borders is increasingly evident. And it has decreed an embargo on European food products affecting particularly Spain. German companies are concerned about the losses that cuts in technology transfers will cost them. And Moscow frightens Europeans ensuring that it will be difficult to come back to the Russian market.

Putin keeps an ace up his sleeve: the energy weapon, the suspension of Russian gas supply to Europe. A double-edged threat. It is true that in Europe it would be difficult to replace this gas, perhaps using the peninsula as a bridge to North Africa as the Spanish government has cleverly proposed. But it is also true that Russia gets much of its revenues from gas exports to the EU. The hope in the European capitals involves to make Putin to understand that, if this happens, not only the Russian economy would be in danger, but even Vladimir’s “regime”.

Until now, in the corridors of Brussels, policy-makers have always tried against all odds to preserve a communication channel with Moscow. And Moscow with Kiev. Europeans already mediated in June with Vladimir Putin to meet in Normandy with the newly elected Petro Porochenko, his Ukrainian counterpart. Something that they repeated after in Minsk.

Despite the beautiful words said after each meeting, nothing has changed.

Maybe that’s why NATO has recovered the old project of the entry of Ukraine. And it has wielded it as a threat. For now, a simple and veiled threat. Maybe unconvincing. Because in case of carrying it out, it would mean armed intervention. The Alliance would be then obliged to assist one of its members as stipulated in Article 5 of the North Atlantic Treaty. The risk of automatic war against Moscow. And this possibility is rejected repeatedly and publicly from Washington and Brussels. The entry into NATO is a distraction movement in the complicated chess game that Russia and the West are playing, intended for instilling encouragement to the Ukrainians. For now, it can not be much more.

But the word “war” is not taboo for Poland and the Baltic countries, where there is a large Russian population with restricted rights as the nationality or the use of their own language in administration and education. Defending their rights would be a good excuse that Moscow could use to destabilize these countries. There they do think that the possibility of an extension of the conflict is real. So they have not ceased asking for more firmness with Moscow in the European Council. These countries, at least, are protected under the safety net of NATO. Others, such as Moldova, are not.

After being chosen for the position of new EU’s foreign policy chief, the minister of Foreign Affairs of Italy, Federica Mogherini, the first thing she said is that it is needed to work on a diplomatic agreement with Russia.

“As we think and we work on the level of sanctions, we also have to keep the diplomatic way open … hoping that the combination, a wise combination, can be effective.”

Putin also speaks of the need to dialogue. But with very specific purposes. In his opinion Kiev should sit with the separatists to give autonomy to eastern Ukraine that takes into account the interests of Russian speakers. He advocates – like so do some German and Austrian politicians-  for a federal state model for Ukraine to allow regions to have a significant degree of autonomy both in terms of language and the management of its finances. And if this fails, the underlying idea is to create a new country, Novoróssia (New Russia) which borders would be drawn according to the result of plebiscites.

This is the will of the Russian president, and he believes to have the means to enforce it. As the Italian newspaper ‘La Repubblica’ published on September 1st, in a telephone conversation Putin told the President of the European Commission Jose Manuel Barroso that his army can conquer Kiev in two weeks if he decides so.

They may be just threats. In the medium term, Moscow knows it has much to lose. Russia can not afford a full arms race, nor a financial and commercial isolation by its GDP and by the volume of its financial reserves. At best Moscow can apply an active defensive position playing with perhaps the only advantage here for Russia: today’s world is more multipolar than bipolar, compared to the Cold War.

Ukraine will change some things forever, for example, the way in which Germany takes its responsibilities in Europe and in the world since World War II. The evolution of German Chancellor Angela Merkel, from the beginning of the crisis is evident. She now admits that while the new sanctions against Russia could affect the German economy, doing nothing “is not an option.”

“There is also an impact when you are allowed to move borders in Europe and attack other countries with your troops,” she said September 1st in Berlin.

In Berlin, policy-makers are realising that this time they can not ignore an international crisis that happens in their backyard. And this may set a precedent for the new German policy of 21st century. We must not forget that after the commitment to abandon nuclear energy, Germany automatically becomes one of the most affected by a cut in the supply of Russian gas.

The conflict in eastern Ukraine has already led to nearly 2,600 dead and 6,000 injured between mid-April, when Kiev launched its operation against the militias, and past August 27th, according to the latest UN evaluation. The EU tries to stop the inexorable machinery of war logic with new sets of sanctions. Without many hopes.

Be the first to comment on "In depth- Russia: sanctions for peace"