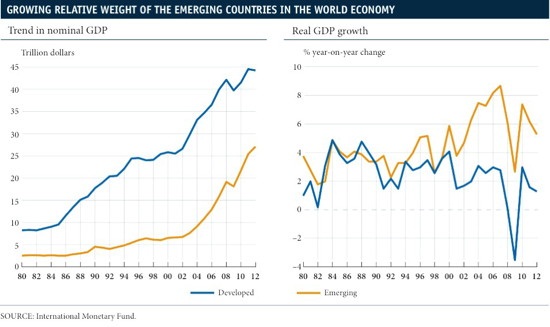 The economic-financial conditions look favourable in 2013 for the group of emerging countries, unlike the unpleasant atmosphere forecast for the United States, the paralysing cold of Japan and persistent storms in the euro area. Should this actually come about, it will continue the pattern these countries have already been following for more than a decade: fast economic growth, stable financial conditions and high yields on financial assets. Logically, this group of countries is notably heterogeneous and some problematic cases do exist, but the outlook is positive on the whole.

The convulsive phase of the 1990s is well behind them, with its stream of contagious crises: the collapse of the Mexican peso in 1997; the speculative attack on the Thai baht in 1998, sending strong shockwaves throughout Asia; the devaluation and default of Russia’s government, also in 1998; Brazil’s real taking a dive in 1999 and, to top it all, the devaluation, strict bank restrictions and default of Argentina in 2001. Since this last date, the economies and capital markets of the emerging countries have experienced a boom that has only been interrupted, temporarily, by the crisis after the Lehman Brothers crash. An examination of the factors leading to this situation helps to throw some light on the prospects for 2013. For explanatory purposes, it’s useful to group these into two categories: internal factors and external factors, which interact in a complex way although, in general, they mutually reinforce each other.

The improvement of fundamentals in the emerging countries is already a well-established process that will continue over the coming years. The most relevant signs of this are high GDP growth, the greater relative weight of domestic demand, a more equal distribution of income, greater social cohesion and more stable political frameworks. 2013 looks like confirming these trends, successfully concluding the tough test set by the western financial crisis starting in 2007 and its subsequent Great Recession.

The emerging countries have managed to sail these rough seas through a combination of agility and firmness, establishing a good basis for the coming year. On the one hand, cycle management policies have been successful, both in handling monetary and fiscal instruments and also in macroprudential terms (regulation of the financial system, capital controls, etc.). Emerging countries responded to the tremendous negative shock in 2008-2009 with highly expansionary policies, forceful enough to vigorously reactivate their growth in 2010-2011. The signs of overheating that soon became evident led to a careful application of restrictive measures in order to ensure a soft landing. And this is what has actually happened in 2012, while the seeds were being sown for further reactivation via more expansionary policies, this time more moderate but longer term and still with an additional wide margin. Crucial countries such as China and Brazil are already starting to see evidence of their economies speeding up.

On the other hand, most emerging countries have steadily strengthened their economic systems, spreading structural reforms, liberalizing markets and keeping a close eye on the solidity of financial institutions as well as the sustainability of public accounts, etc. Within this context, the emerging countries as a whole could easily achieve growth in GDP next year of around 5.5%, one percentage point higher than the average for the last four decades.

For their part, the push factors are looking equally favourable for the emerging markets. As is common knowledge, the central banks of developed countries have responded to the crisis with ultra-expansionary monetary policies. Official interest rates in the United States, Europe and Japan have effectively been at zero for some time now and will remain there, not only during 2013 but for longer, bringing down the yields on monetary assets. Moreover, the various quantitative easing programmes instigated by central banks have brought internal yields on sovereign bonds and other investment grade assets down to exceptionally low levels, encouraging international investors to look for more profitable alternatives (search for yield).

The expansion in the monetary base has been huge and, although the broadest aggregates (e.g. M3) have grown moderately, the conditions of global liquidity are and certainly will continue to be lenient throughout 2013. Traditionally, the emerging markets have benefited greatly from such situations and this time shouldn’t be any exception.

Be the first to comment on "Outlook for the emerging countries: clear skies and agreeable temperatures"