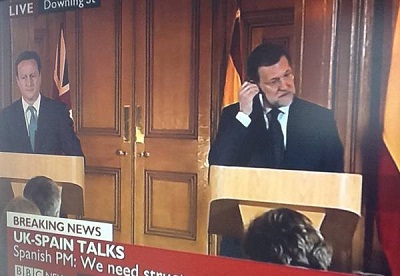 LONDON | Spanish president Mariano Rajoy stepped on to Downing Street but talked instead to the City of London. It will not be the last time that this happens. The shift in the UK’s relationship with most European Union country members should be a troubling sign of the declining power Whitehall and the Houses of Parliament retain amid one of the most crude economic downturns seen in some decades.

Then again, it may come as an unsurprising consequence of a Conservative-led government that has pledged alliance to London’s financial hub in every occasion.

Tuesday’s was Mr Rajoy’s first visit to the UK since taking office in December. He came with a strict agenda and a message to deliver to the investing community, in spite of the British prime minister describing their conversations as focused over trade, cooperation and key global issues. Indeed, Mr Rajoy did not care much about Number 10’s script.

“I paid tribute to the fact that the Spanish have joined the European effort to put in place an oil embargo on Iran,” Mr Cameron said, “I think this is a really positive step forward to show to the Iranian government that they must change course and abandon their plans for nuclear weapons […] and also that we are working together on sanctions against the Syrian regime.”

The Spanish president uttered not a word about Iran or Syria; he was manifestly uninterested to back up Mr Cameron’s travails to appear closer to his continental neighbours in the European picture, or perhaps didn’t follow his speech.

The lack of coordination between the two leaders during the joint press conference, however, wasn’t entirely linked to the Spanish premier having scarce knowledge of Shakespeare’s language –Mr Rajoy even left unanswered a couple questions made by British journalists. While Downing Street had attempted to frame the meeting within the Coalition’s move to approach positions to other EU partners, Mr Rajoy did not played to Mr Cameron’s European-foreign-policy tune but spoke of a plan to convince the City that Spain’s economy will recover, its net borrowing will be reduced and its credit will be repaid.

“Spain, as very many other countries, has a major objective. Ours is very clear and known to all: to promote economic growth and create jobs, which is tantamount to generating wealth and well being. We need to act on four different lines, but simultaneously.”

He went on to detail all four points, from fiscal austerity to the labour market reform, to the need for the European Central Bank to weigh in by providing liquidity to EU banks, to enhancing competitiveness in an open world:

“We have a fiscal stability law that will receive final approval from our parliament very soon.

“Last Friday, we approved a reform of our labour market. The week before that, a reform of our financial system. These will be four years in Spain, especially this first year, of very many reforms in our economy in order to lay very solid foundations for the future.

Of course, UK’s prime minister had to say it,

but at least Mr Rajoy’s trip would have proved successful in bringing the British leader to acknowledge the extent to which Spanish banks and companies are doing business in Britain –something Britons themselves are not as aware of as all those red-decorated Santander branches throughout London would let one believe.

“There is an incredibly strong relationship between Britain and Spain […] We have very strong economic ties between our countries, huge UK investment into Spain and massive Spanish investment into the UK. We will be seeing one example of that, Ferrovial, a big contributor to the Crossrail project, this afternoon.”

The Spanish president could not avoid domestic issues, either. A journalist asked Mr Rajoy about the so-called Valencia Spring –a series of civil demonstrations have now for several days occupied the city’s main streets after students complained that the police have tried to prevent their staging peaceful protests when their schools had to switch off the heating to make savings. Images of police officers attacking 14 and 15-year olds have triggered a general sense of outrage in the region.

“As regards Valencia… that issue. We’re going through difficult times and I think right now the best thing for Spain is for everyone to help act as an engine. Everyone, and I include myself, has to make the effort to be up to what’s expected of us. We cannot give an image of our country about what it isn’t.”

President Rajoy was fortunate that most British economic commentators have their plates full of fresh Greek-bailout data to digest. He must not allow overconfidence to take hold of his anti-crisis plans and forget about their social impact. Everybody is watching.