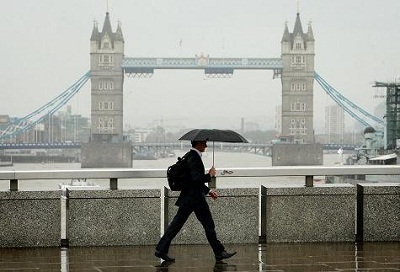 LONDON | Already in the mood to dismiss 2012 as a lost year for the UK economy? Analysts in the City of London waived as a non-event the preliminary GDP estimate of this year’s first quarter, released Wednesday by the office of national statistics, which showed that the British economy had contracted by -0.2%. The negative figure added up to a -0.3% fall in the economy in the final three months of 2011, what means that the UK has slipped back into a technical recession.

Few would concur with the Labour leader Ed Miliband that this is a crisis entirely made by the current Coalition government. Indeed, some experts go as far as to bin whatever efforts Downing Street may display in solitary to speed up growth. Take for instance Mark Berrisford-Smith, head of economics for HSBC’s UK Commercial Bank, who recently told half a hundred British business delegates that it will not be until 2017, ten years on from the start of the credit crunch, before the UK is fully recovered.

The immediate reaction of Number 11 was, to say the least, impolite yet unsurprising:

“The BBC’s chief political correspondent, Norman Smith, said the Treasury was again blaming the difficulties facing the UK economy on the eurozone, with sources saying the eurozone is predicted to enter recession and therefore it would be hard for the UK to avoid one.”

About 40% of the UK’s exports go to the euro zone, so the chancellor George Osborne might be right to tell British protesters to send their complaints to Brussels. It turns out, nevertheless, that the weakest link in today’s chain of data were not export numbers alone. Azad Zangana, European economist at Schroders, highlighted in its note that

“Within the details, the Construction sector made the biggest negative contribution by shrinking by 3%, while output from the industrial sector also fell by 0.4%. However, the biggest disappointment was the service sector which was widely expected to grow by about 0.5%, only managed 0.1% on the quarter.”

Schroders said that even if there is room for revisions to these numbers given that they are early estimates, it doubted they would be large enough to make the double-dip go away. In fact, Zangana added that

“The double dip in recession comes as no surprise to us. We have been forecasting another recession since last November when the euro zone crisis intensified. We are forecasting a further falls in GDP for the second quarter.”

In Zangana’s opinion, more sterling printing from the Bank of England is now on the horizon and an option for the Coalition cabinet would be to seek a relaxation of the deficit target deadline. Being too early to call for a reversal of government policy, the latest results would prove that the economy can hardly withstand further acceleration in cuts.

“We suspect the Treasury recognises this and is why the Chancellor chose to prolong the cuts into 2016/17, rather than deepening the cuts in the near-term.”

Andy Scott, account manager at currency specialist HiFX, confirmed that the sterling had been impacted by the news and was sold off across the board as the median expectation of the market was for growth of 0.1%. Scott hinted as well at euro contagion to explain the ugly bump:

“It’s a huge disappointment and somewhat surprising given the very positive PMI data which showed increasing activity in the services, construction and manufacturing sectors in the first three months of the year. The slowdown in Europe’s economies, brought about by a combination of the sovereign debt crisis, forced austerity measures and uncertainty over the single currency, are clearly hitting the economy here.”

So the sooner the prime minister David Cameron and his team abandon the idea that the UK can effectively severe its ties from the future of the euro, the better. A bigger role for the UK in the European Union and, indirectly, the European Monetary Union, would not only enhance its capacity to protect itself from EU policy mistakes, it would help euro continentals to better understand the markets. Or economics, for that matter.

As HSBC said about the apparently decline in the UK’s economic performance,

“In the past few months there has been a tangible improvement in the mood of both consumers and businesses in the UK. Irrespective of what the official growth estimates may say, business surveys suggest strongly that a modest revival is underway in the private sector.

“All being well, 2013 should see a return to stronger growth, of around 2%. Moreover, it is likely to be better balanced growth than the UK has been accustomed to during the past 15 years.”

That is what one gets when austerity can be paused because the relationship with investors is much more comprehensive and fluid, instead of the true-enemy shouting that is pushing the euro zone to nowhere.

Be the first to comment on "The euro claims another victim: the UK"