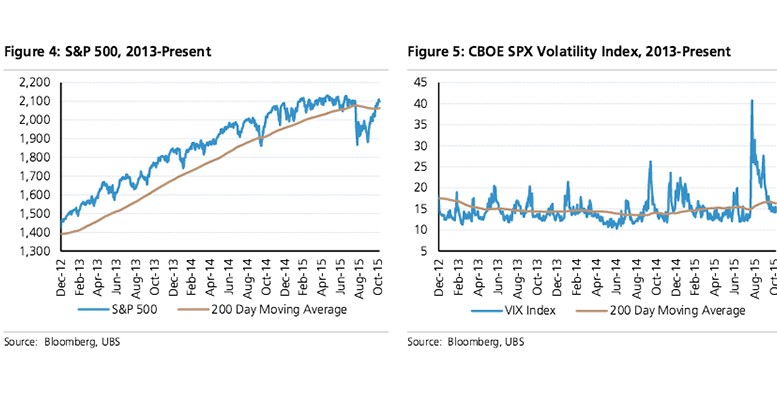 UBS | 81 months and 200% higher, this Bull is the third longest since 1932 and surpasses the average of 138%. While age or return alone does not signal The End, increasing volatility, Fed rate hikes, and an M&A boom in its third year have all preceded past tops. Importantly, neither valuation or sentiment excesses nor signs of a recession, usually evident at peaks, are apparent – yet. 2016 will likely see balance sheet strength, modest earnings growth and a subdued but rising interest rate backdrop. We forecast a year – end S&P 500 price of 2,275 and earnings of $126 in 2016 and $132.50 in 2017.

Higher volatility expands potential downside and upside outcomes. Upside to a multiple near prior peaks is catalyzed by positive Fed reaction, a China “soft landing” and a long awaited return of the Public as buyers. Stocks are historically strong in the October to April period; an overshoot is likely in 1H2016 prior to a focus on the November 8 US Elections. We recommend going long the SPX June 2,175 Call/1,850 Put Risk Reversal for a potential 1H “Suspension of Disbelief” rally.

Anemic earnings whether a result of a slugg ish US economy, margin pressures or foreign weakness ends the Bull. Absent soft earnings, liquidity concerns resulting from deviations in “global central bankers’ scripts” – episodically evident over the past year – could prompt margin liquidation and market gridlock. In no ongoing bull market since the 1970’s has the next year traded below the preceding year’s low price. The 2015 low is 1,867.01; a breach would likely result in volatility exceeding August 2015 peaks.

Sector preferences are driven by cash – more valuable with rising volatility and rising rates. Cash is augmented by valuations, earnings consistency and the potential for more M&A. We underweight Consumer Staples, Utilities and Telecom given growth and regulatory headwinds as well as sensitivity to rising rates. Selectivity is critical as the Bull enters its seventh year; we prefer UBS Buy rated stocks which have grown revenues YoY over the past five years and (ex – Financials) which have 15% or more of total assets in cash.