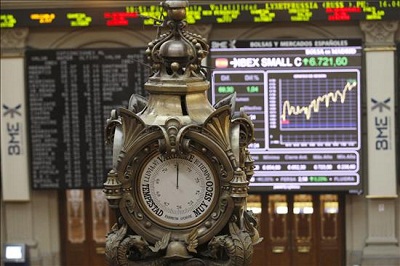 MADRID |Deutsche Bank changed its financing strategy by registering a fixed income prospectus in Spain for the first time in history, as reported by the Spanish journal Expansión. The German entity will issue mainly bonds and mortgage notes for an amount of €15 billion, according to the initial information document, which has been sent to the Spanish Securities Exchange Commision or CNMV.

Sources at the bank said that

“this decision proves the group’s confidence in Spain and in the Spanish capital markets.” Deutsche Bank intends this way to leave its doors opened to every financing possibilities, “due to the current conditions affecting the markets.”

Management of the Deutsche Bank cash flow was so far centralised, but especially since the end of last year, international entities with presence in several markets began to demand that their subsidiaries were able to obtain credit facilities on their own, so as to minimise risks.

Before the economic turbulences get worse, Deutsche Bank  and other German entities usually provided liquidity to their subsidiaries whenever they need it, since the parent company financing costs were very cheap. Nevertheless, Deutsche Bank will have to raise their own resources in Spain from now on in order to keep its profit and loss account balanced.

As it is usually reflected in prospectuses, Deutsche Bank stresses the risks that investors buying its debt will take and also adds data about its subsidiary business. For instance, the German firm points out that, as a consequence of the new financial reform approved by the Spanish government, Deutsche Bank Spain will have to make additional provisions estimated at €47.6 million, which will be probably absorbed within the year income,

“maintaining the core capital over the minumum regulated”. The entity has a core tier 1 of over 8%.

The subsidiary’s non-performing loan rate stood at 5% on March 31, with a coverage level of 77.5%. Its credit portfolio assigned to the construction and development industry in Spain at the end of 2011 had reached €482 million, with a payment default rate of 40%.

On the other hand, Deutsche Bank Spain’s exposure to Spanish sovereing debt was only €0.8 million in December 31, 2011.

Be the first to comment on "Deutsche Bank issues its first €15 billion in bonds, mortgage notes in Spain"